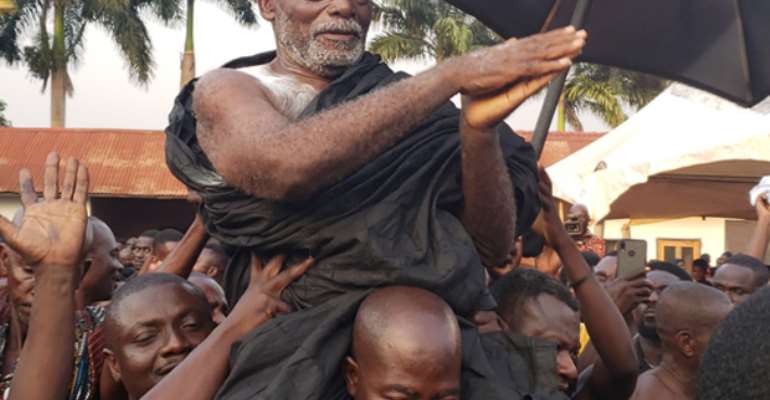 NANA OSEI Atwene Bonsu, a Chartered Accountant, is now the occupant of the Atene Akuampong Stool in the Manhyia Palace in Kumasi.

He successfully swore the oath of allegiance to the Asantehene, Otumfuo Osei Tutu II, during a colourful traditional ceremony on Tuesday.

Known in private life as Osei Asamoa Bonsu, the new chief is the Managing Director of the Asamoa Bonsu and Co, a chartered accounting firm.

The swearing-in ceremony was witnessed by scores of Ashanti chiefs, friends and loved ones of Nana Bonsu.

Traditionally, it is the duty of the occupant of the Atene Akuampong Stool to use palm branches lighted with fire to lead and provide direction for Otumfuo at night.

The Asantehene advised Nana Bonsu to be truthful in all his dealings so that his reign would be successful.

The Asante King recounted the history of the Atene Akuampong Stool and how important it is to Asanteman; he urged the new chief to diligently serve the Golden Stool.

Later in an interview, Nana Bonsu wholeheartedly thanked the Asantehene and Nananom for the great honour done to him.

He said the Atene Akuampong Stool had been vacant for a long time and was privileged that the Asantehene had given him the chance to occupy the revered stool.