By United Zongo For Bawumia 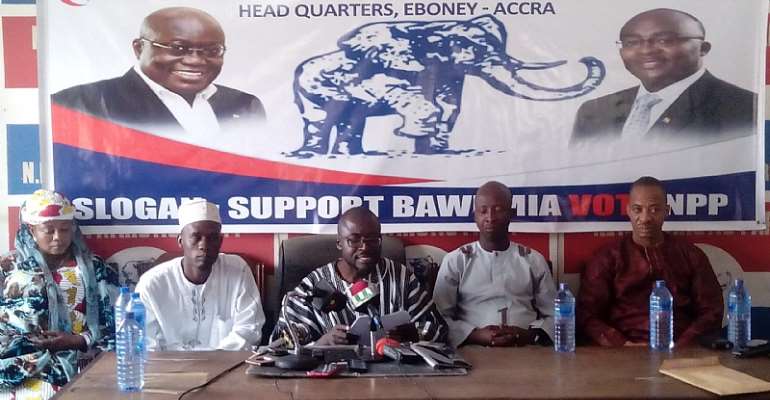 A pressure group known as United Zongo for Bawumia which sympathetic towards the Vice-president Dr Mahmoud Bawumia has taken a swipe at former President His Excellency John Dramani Mahama for his recent comments he made on the proper usage of the Zongo Development Fund.

Ex-President Mahama is alleged to have criticized some of the policies of the government with regards to the execution of the promises to the Zongo Community but in a rebuttal, the United Zongo for Bawumia said their research indicates that dwellers of the various Zongo communities across the country are better off than before.

Read the statement before
Good morning everyone, thank you for making it to this press conference, despite the short notice.

We gathered you here to refute and respond to some unfortunate claims made by the Ex-President Mahama recently on the zongo development fund.

Mr. Mahama and the NDC during their unfortunate time in power, starved the Zongo communities even a chance to smile. We lacked basic social amenities and also we were left virtually at the mercy of some donor organizations and other benevolent Muslims.

The NDC had no policy or plan to develop the skills and capacities of our teaming youth or even our communities.

So we find it unfortunate that Mr. Mahama after neglecting the Zongo communities during his regrettable time as president, has no form of shame, but has the boldness to criticize the policies and programmes being implemented by the Nana Addo Bawumia led government. We ask ourselves, does he even care about us or it is merely for political expediencies because things do not add up?

If he cares to know, our Zongo communities are doing better now and in the few years of the NPP, there have been numerous of opportunities through the Zongo Development fund to build and develop our skills and capacities.

These are contrary to the terrible experience we faced under your watch as President who never had the Zongo society at heart.

Again, if Mahama cares to know, it is indeed refreshing to see how much President AkufoAddo’s government holds the Muslim and Zongo communities’ plights with much importance.

Considering the comments he made, we have no form of doubts that his handlers are not briefing him correctly.

In this sense, we believe it is prudent that we elaborate him on the unprecedented number of interventions being out laid by the Akufo Addo’s administration to uplift the living standards and rights of our Zongo communities. Unlike your government, Mr. Mahama, there has been the implementation of programmes and proposed policies by this government which are giving our Zongos a new look and the realistic opportunities we desired for total transformation of our Muslim communities in Ghana.

Among these is, firstly, the creation of the Ministry of Inner-City and Zongo Development; a ministry established to purposely attend to the welfare and developmental needs of the Zongo communities.

So its mind-boggling that Mr. Mahama could criticize the government for the Zongos. We want Mr. Mahama to know that the current NPP government unlike his bad government has been committed to making education accessible to all, so we can gain the required skills and knowledge to develop our country.

Children from out Zongos are equally benefiting from the NPP’s Free Senior High School education and above all, the teaching of Arabic in our Islamic schools which died under your tenure, has been resurrected and enhanced.

For the first time in the history of our country, Muslims pilgrims go to Mecca without any setbacks in flights or hotels arrangement. Obviously, the president holds the Islamic faith in high esteem, that is why he constituted competent members of the Hajj Board to steer the affairs of people from the Zongo communities embarking on Hajj.

It is therefore imperative to state on record that, no government has been this benevolent to the Muslims and Zongo communities than the Akufo-Addo-Bawumia led administration. Indeed, we have no doubt that the President is really the ‘ Zongo man’s friend’ as touted by many in the Zongo communities.

We want Mr. Mahama to know that we saw his leadership and how devastating he left our Muslim communities; so the least we expected of him is this form of criticism to the prudent policies being implemented by the Nana-Bawumia led NPP government to enhance the living standards of our Zongo communities.

We think he should be ashamed of the manner he neglected our Zongo communities but, he does not seem to and that is very shocking.