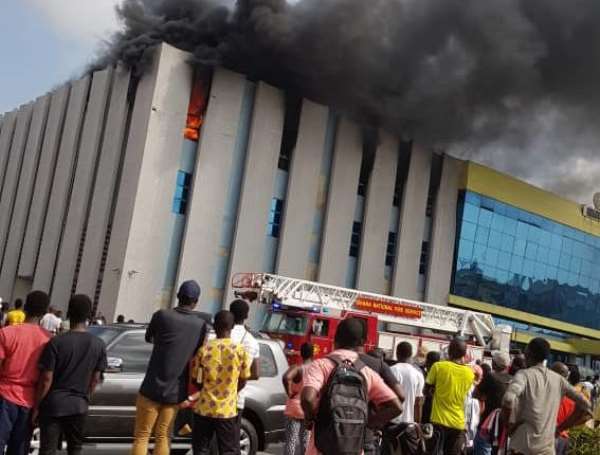 The country lost about GH¢19 million to fire outbreaks between January and September this year.

According to the Ghana National Fire Service (GNFS), this had come about as the consequence of 4,476 fire outbreaks that were recorded within the period.

From statistics made available by the service, the fire incidents also claimed 271 lives and left 1,714 persons with varying degrees of injury.

The Ashanti Region topped the chart with 878 fire outbreaks, while the Greater Accra Region followed with 762 cases.

The region with the least cases of fire was the North East Region with 18 fire outbreaks.

The causes of the fire outbreaks were categorised as domestic, industrial, vehicular, institutional, electrical, commercial and bushfire.

Fires from commercial establishments topped with 658 cases in the period under review.

He said the reason for the rise in commercial fire outbreaks was because most markets in the country were wired illegally and cooking also went on there, exposing the places to naked flames.

“People are only eager to do business and do not pay attention to safety requirements. Rather than get electricity properly connected, they instead do illegal connections which are likely to result in fire,” Mr Okoe explained.

“Others also cook their daily meals in their shops and sometimes they mistakenly leave the fire without putting it off when leaving for home. Later, this fire comes into contact with combustible materials and a blaze is started which then spreads,” he added.

He urged traders in the market to be cautious of their activities, particularly as the Christmas occasion approached.

Mr Okoe urged market traders to avoid cooking in their sheds and if they must, they must ensure to put them off thoroughly before leaving for their homes.

He also advised families and companies to have fire fighting equipment such as fire extinguishers, fire alarms and smoke detectors, since they would ensure early detection of fires before they resulted in large flames.

Christmas caution
Mr Okoe further urged companies to ensure that all gadgets and switches were turned off before they went on the Christmas break.

He also called for waste paper to be disposed of properly if they must be burned so that fire from the incinerator did not get into contact with any combustible material.

“All companies, if possible, should have safety officers who must check every corner to ensure that all was safe,” the PRO said

He warned against the use of fire crackers, adding that the level of explosives in some of them could also trigger fire outbreaks, especially when they came into contact with other combustible materials.

Call lines
Mr Okoe also urged people to stop using the radio stations as a means of sending them information about fire outbreaks, saying that “it may be that personnel at the Fire Master Control Room may not be listening to radio at that moment and so such means could delay the time the service would get to the scene of the incident.”

He, therefore, urged the public to call the fire service on telephone number 192 or 0302772446 and speak directly to the officers on duty.