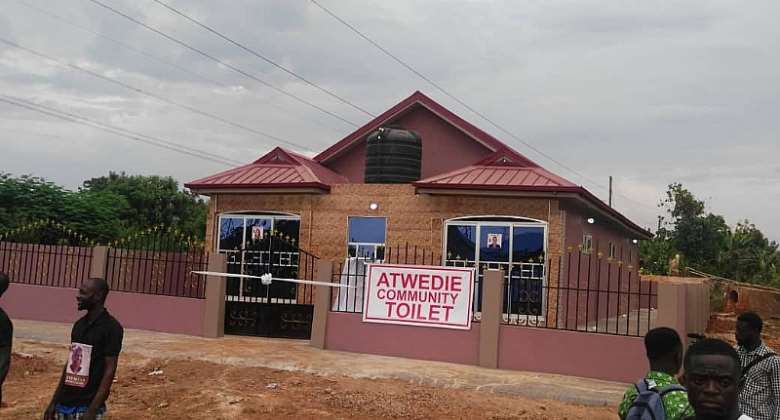 The Asante Akyem Atwedie Community in the Asante-Akyem South Constituency has benefitted from an ultra-modern 20-Seater Community Toilet Facility project.

The high level of open defecation and poor sanitary conditions in the Atwedie area due to the lack of a place of convenience was the reason behind the construction of the toilet facility.

The situation was so bad that residents were compelled to ease themselves in the bushes, classrooms among other places.

The project was undertaken and handed over to the chiefs and people of Atwedie by Mr. Michael Obeng, a native of the town, Philanthropist and CEO of First Klass Shipping Specialist UK and First Klass Music.

Speaking at the official launch and commissioning of the Atwedie Community Toilet, Mr. Michael Obeng expressed appreciation to the Atwedie Queenmother and her husband for allocating the land for the project.

He also thanked his wife for the support as well as the traditional leaders, opinion leaders, staff and management of First Klass Shipping Specialist, First Klass Music and the entire Atwedie community for their support.

Mr. Obeng said his decision to build the facility was influenced by a video he saw on YouTube about the open defecation due to lack of a toilet in the community, while he was in the UK.

He said he was embarrassed as a native of the community and saw the need to provide the people with a standard toilet to end the practice.

“This project is also part of the Corporate Social Responsibility (CSR) of FIRST KLASS GROUP OF COMPANIES. This COMMUNITY TOILET FACILITY PROJECT is also being donated to the Atwedie township in loving memory of my grandmother, the late Margaret Sakyiwa aka Abena Epo today, Friday the 6th of December 2019.

I would like to appeal to both the management and users of the facility to ensure that this place of convenience will be put to good use and also help keep the toilet clean and maintain it well.

As part of efforts to enable the managers to run the facility judiciously, there is a subsidized charge of 50 Ghana Pesewas to be paid by users,” Mr. Obeng stated.