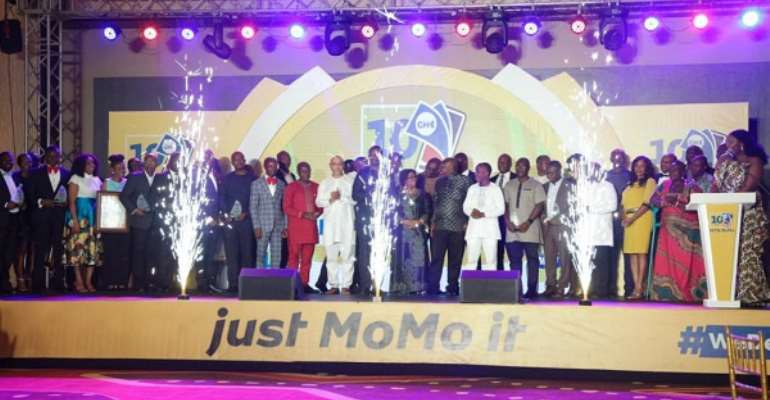 MTN Mobile Money Limited brings its 10th anniversary to a memorable end with stakeholder awards and dinner at Kempinski Hotel on 13th December, 2019.

Key partners including individuals and institutions were awarded for their excellent role in sustaining the MTN mobile money (MoMo) brand to its present success.

IT Consortium and CoreNet picked the MoMo Fintech Pioneer awards. Also, the Most Innovative and Supportive Fintech Partner went to IT Consortium.

Eli Hini who has been described as the “Godfather of Mobile Money in Ghana” was recognized for his yeoman role in spearheading the growth of MoMo in the country.

Mr Hini who is also the General Manager of MTN Mobile Money was adjudged as the MoMo Trailblazer.

The MoMo Journey
He said the Mobile Money service (MoMo) as we now call it, began when MTN, ventured into this area of using the mobile phone as a tool to undertake financial transactions. After discussions with critical stakeholders, we launched Mobile Money service in 2009 under the leadership of MTN Ghana’s CEO, Brett Goschen. Tarek Itani, an MTN staff is credited with making the first transaction on 25th Sept, 2008 at 3:51pm. We officially launched the service on July 21st 2009.

Shortly afterwards, we hit the ground running with the catchy ‘Minsa aka” ad. The ad garnered a lot of “fans” as we say it but unfortunately it did not attract the numbers we were looking for. We had to come up with all kinds of ideas including regional relaunches to make it work to justify the continuous investments. Once we got over the bump of lack of familiarity, we made a lot of progress and today here we are.

Leadership and commitment was key so at this stage, I would like to commend the leadership of MTN, our staff, distributors who worked tirelessly to get this service accepted. It took many sleepless nights, staff braining storming sessions and a lot of hardwork and collaboration from all our partners for us to succeed. We are extremely grateful to everyone who contributed.

Achievements
Eli Hini continued: From less than 100,000 subscribers after 6months of launch, our registered subscriber numbers have reached the 14million milestone over this 10-year period. We started with 9 partner banks and now we have 18 partner banks, with the 19th on the way.

With the increase in numbers came the change in Technology partners. From Fundamo we “ported” to Ericsson seamlessly in Oct 2015 and got our ISO accreditation in the first quarter of 2016, the first in the industry.

A decade down the line, MoMo has become the foremost financial Services platform in the country. We are proud of this achievement.

Today, there are about six major categories of financial transactions on the MoMo platform under which there are other sub-services. On MoMo today, we are not just sending and receiving money or paying bills, MoMo is now used for Saving, Investing, Payments, Shopping, Insurance and Loan acquisition.

As at the end of November this year, we had over 140,000 active Mobile Money agents. We also have over 5000 mobile agents/canvassers. Some of these agents and canvassers, prior to the introduction of MoMo had no meaningful employment.