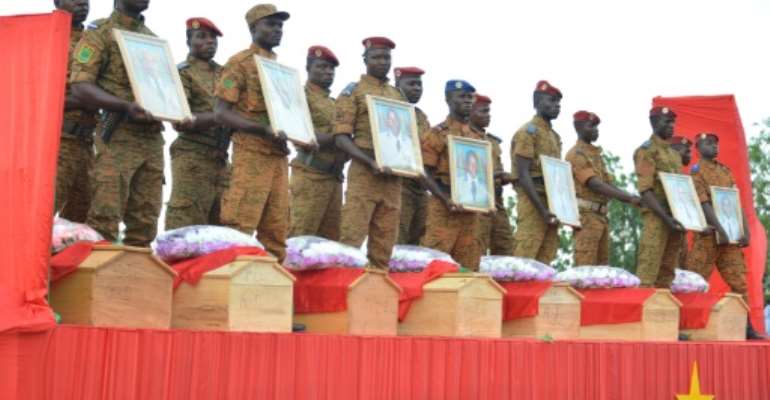 Home-made bombs -- 'improvised explosive devices' -- have claimed 133 lives in Burkina Faso since the middle of last year. By STR (AFP)

They are cheap, made from components that are easily obtained -- and murderously effective.

Security experts say that in the arsenal of jihadist groups whose insurgency is shaking the Sahel state of Burkina Faso, the improvised explosive device (IED) is one of the deadliest weapons.

"It's a poor man's weapon in an asymmetrical war."

Thousands of civilians and soldiers have died in violence across the Sahel which began when armed Islamists revolted in northern Mali in 2012.

The conflict has since spread to neighbouring Burkina Faso as well as Niger, two of the world's poorest and most fragile countries.

"IEDs appeared in (Burkina Faso) in mid-2018. Since then, we have recorded 33 attacks with IEDs, claiming 133 lives," said Italian researcher Roberto Sollazzo.

Hidden in plastic to thwart metal detectors, packed with nails for a shrapnel effect, the IED is increasingly used in roadside ambushes.

On November 6, an attack on a convoy of Canadian mining company Semafo killed 38 people. The IED blew up a military escort vehicle before jihadist forces emerged from behind cover to machine-gun the buses.

"The point of an IED is that it has to be made cheaply, using locally available materials," Sollazzo said.

"Burkina is a nation of mopeds," he said, referring to a light motorcycle also known as a mobylette.

"There are 300,000 of them in the country. So many components of an IED can be taken from them without attracting the attention of the security forces."

Mopeds are cannibalised for their rubber tyres, which are used in parts of a simple pressure-plate switch that activates the bomb when a vehicle passes over it, and for their batteries, which ignite the detonator.

Wreckage of an army truck that struck a roadside bomb near Fada N'gourma, eastern Burkina Faso, on August 28. Seven members of the security forces were killed. By (BURKINA FASO'S ARMY PRESS OFFICE/AFP)

For fuses and detonators, the jihadists go to the same suppliers as artisanal gold-diggers who buy the materials to blast rocks at mining sites.

"There's trafficking from Ghana for the gold-diggers. They can buy a package of dynamite, fuse and detonator for 5,000 CFA francs."

Such kits are enough for the miners, who lack the means to buy in bulk.

"But what interests the jihadists most is the detonator," the security expert said.

The non-profit International Crisis Group (ICG) warned in a report in November that jihadist groups are taking a growing interest in artisanal mines as a "new source of finance, even a recruiting ground", with potential for training in the handling of explosive materials.

Apart from dynamite, IEDs may also use a mix of ammonium nitrate -- a chemical found in fertiliser that is sold in Burkina Faso for 20,000 CFA francs for a 50-kilogramme (110-pound) bag -- and fuel oil, which again is scavenged from mopeds.

Sollazzo says that "the most complicated" aspect for bomb makers is getting the IED to explode.

"Mostly it's done with wire and a manual trigger," he said, while the security expert said Chinese-made remote-control devices were emerging that appear to have been brought in from neighbouring Mali.

Construct your own roads if you can build GHS5m mansions; st...
20 minutes ago