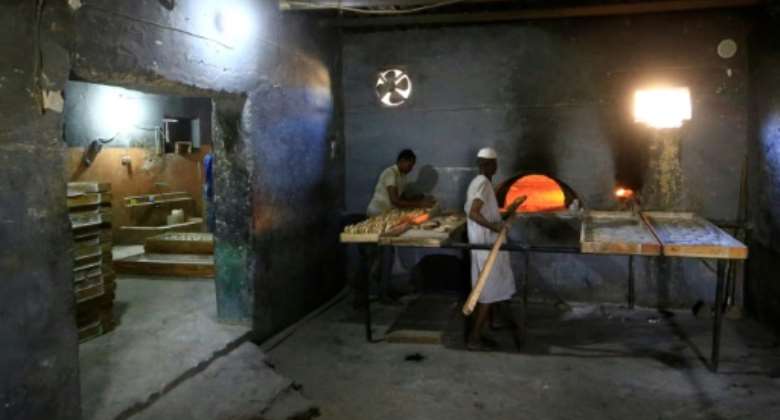 Sudanese bakers prepare loaves in Atbara, the cradle of protests against the price of bread this time last year which eventually brought the downfall of President Omar al-Bashir in April. By ASHRAF SHAZLY (AFP)

A year since bread prices tripled overnight, sparking protests in the Sudanese town of Atbara, residents say bakeries are producing more loaves than the town can eat.

In was in the dusty streets of the central town on the banks of the River Nile that Sudanese demonstrators held their first rallies against the government's decision.

The authorities quickly reversed the move, but it was too late.

The protests swept across the African nation and by April, they had toppled veteran autocrat Omar al-Bashir, in power for three decades.

Four months later, after protracted talks with the country's military rulers, protesters and activists won a deal to set up a transitional government and pave the way for civilian rule.

This week in Atbara, residents will celebrate the gains of their revolution.

He blamed the crisis on "mismanagement during the previous regime".

"Now every family can get the amount of bread they want and bakeries in town produce more than the citizens of the town need," he said.

To mark the anniversary, the Alliance for Freedom and Change protest umbrella group will send a train from Khartoum, recalling those that carried thousands of protesters to the capital at key moments during the uprising.

But this was a heavy burden on public finances in a country hit by US sanctions and the loss of oil revenues since South Sudan gained its independence.

In December 2018, authorities raised the official price of a 70-gram loaf from one Sudanese pound to three, prompting a rush on bakeries and long queues for bread -- sparking the rallies that marked the beginning of the end for Bashir.

'Proud of our government'

In December 2018, authorities raised the official price of a 70-gram loaf from one Sudanese pound to three, prompting a rush on bakeries and long queues. By ASHRAF SHAZLY (AFP)

Today in Atbara, bread is no longer a hot topic and there are no more queues outside the bakeries.

"Before the revolution we suffered a lot. Our revolution solved the (bread) problem for our town," Noujd el-Shelali, a 35-year-old agricultural engineer.

Bread is so plentiful that to ensure that everyone gets their fill, residents have set up a citizens' committee to distribute it.

"Now we monitor everything, the distribution of flour, the bakeries, the manufacturing of bread inside the bakeries and the selling of bread to the citizens," said committee member Imad Abdel Hafez.

He said a member of the committee is present round the clock at bakeries to ensure that everything runs smoothly.

Thanks to this system, said Heba Alaa Allah, "we said goodbye to the bread crisis in Atbara".

But the young woman, wearing a traditional veil, said prices of other food items such as meat, fruit and vegetable are still too high.

Bread is now so plentiful that there is a surplus in Atbara, residents say. By ASHRAF SHAZLY (AFP)

Protest leader Said Ahmed Mokhtar said he hoped this would be resolved soon.

"The people are still suffering," said the 60-year-old.

"But still there is a possibility to solve all these problems because we have the revolution."