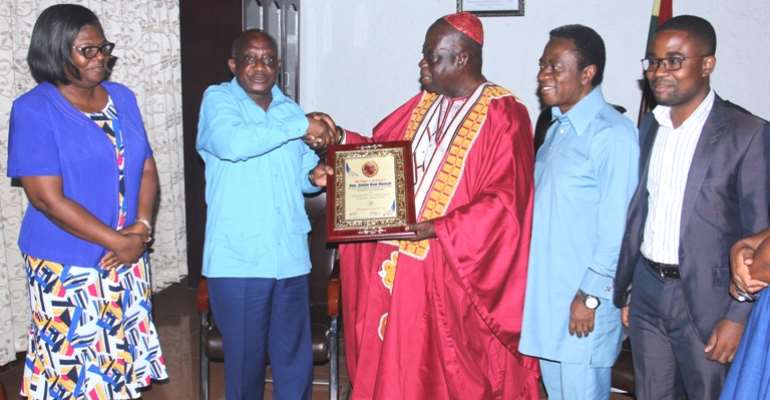 The Charted Institute of Leadership and Governance in the United States of America has awarded the Ashanti Regional Minister, Simon Osei-Mensah, with an "Excellence in Organizational and Heroes award".

The US-based institute which seeks to encourage exemplary and quality leadership across the world through its Ghana office noted that Mr. Osei Mensah’s type of politics and leadership style is one of a kind and needs to be, not just recognized but encouraged.

‘He is fair, plain and says things as they are without fear or favour. His style of politics, to us is unique and such kind of leadership is very rare in our present-day politics, and we are happy to choose him for this award’, Apostle Dr Emmanuel O.K Donkor, former General Secretary of Christ Apostolic Church International and a National Executive Member of Ghana chapter of the Institute said of Mr. Osei-Mensah in presenting the award.

He explained that the institute chose to honour the two-time best Regional Minister, ‘after we were convinced of his sincerity and the qualities he possesses in handling issues in his capacity as the political head of this region’.

According to the institute, awarding the regional minister with the "Excellence in Organizational and Heroes award" is worth it since his performance at the Ashanti Regional Coordinating Council has been tremendous.

According to the former General Secretary of the CACI, the country needs strong and highly motivated leaders to build strong institutions for development to thrive, adding ‘it is heart-warming to note that we still have leaders who will do things in the interest of the country and not for a few.’

Rev. E.O. Donkor said the problem of most African countries is not just weak institutions but leadership hence the award to encourage and motivate the Regional Minister and other hardworking officials who have shown exceptional political and administrative leadership in the country.

"Having good and capable leadership is our goal and if other countries like Singapore where I schooled and the U.S.A have done it, then we can also do it better. The Ashanti Regional Minister has been one of those with exceptional leadership skills and we believe that the region will be one with a difference and people will appreciate the work of the ARCC under his watch," the National Executive Member noted.

Receiving the award, Mr. Osei-Mensah said he was humbled again, for such an award, which he stated will spur him to do his best for the region and country. The Ashanti Regional Minister was thankful stating that it is an honour for a big institution like the Charted Institute of Leadership and Governance to recognise his work.

Expressing gratitude to the institute, he pledged to work hard to the satisfaction of many if not all.

The rest are Dr. Asare Bediako Adams, Director of Africa Operations, Chartered Institute of Leadership and Governance, Prof. Nana Afia A. Opoku-Asare, Department of Educational Innovations, Kwame Nkrumah University of Science and Technology, as well as Prof. Jonathan Fletcher, and Dean, School of Leadership and Education, Univerisity of Ghana.