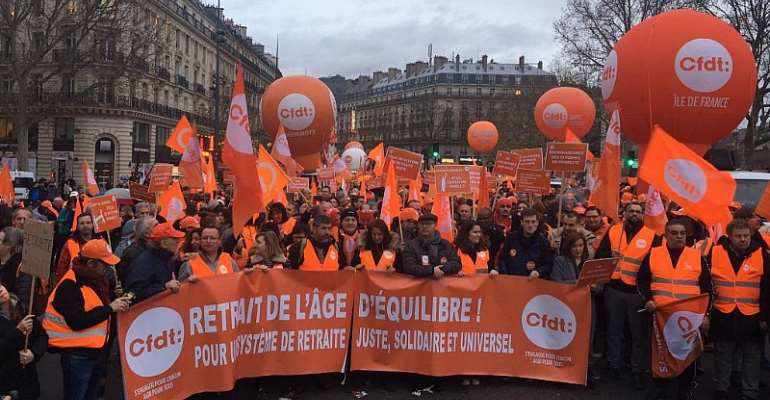 France's largest union CFDT has joined the other main unions for Tuesday's mass protests against pension reforms. The bloc did not take part in the first two marches, but last week declared the government had crossed a line with its "pivot age" proposal. But the unions remain far from united.

The CFDT's participation in the nationwide protests marks a potential turning point in the rolling strikes that began on the 5 December.

The reformist union has historically been keen to compromise and has backed the government on several contentious reforms over the past two decades.

Unlike the other main unions striking against the reform, the CFDT is in favour of a universal system: merging the current 42 separate pension schemes into a single one.

In contrast, the leftist unions, CGT, FO, CFE-CGC, FSU and Solidaires are all marching under one banner, demanding the government completely scrap its reform proposal.

The division was clear on Tuesday, as the CDFT marched seperately, and well behind, under its own banner.

'Pivot age' problem
The CFDT's "red line" comes in the form of the so-called pivot age of 64, at which people would qualify for a full pension, even if the legal retirement age remained 62.

“The CFDT believes the government has crossed a red line in imposing a pivot age of 64,” the union said in a communiqué.

“Since the government has proposed extending the retirement age for all workers, the CFDT is mobilising to remove that part of the text, not all of the reform,” said Laurent Berger, the union's president, in an interview with The Nation.

A retirement age of 64 may appear comparatively early when looking at other Western nations. But the CFDT said the pivot age would be particularly unfair for two main groups.

“Those who begin work at a young age, and those who are unemployed towards the end of their careers will be penalised by this. As of 2022, those who can retire at 62 must work longer to maintain their level of pension,” wrote the CFDT in a statement.

“We want to move towards tolerance, justice and equality for today and tomorrow," Pierre-Marie Rochard, from CFDT's education and research branch, told RFI.

"We don't want to amplify everything that is not working today – and the issue of age is something particularly brutal and unjust," he added, saying that the push to 64 was a punitive measure for all those who want to retire earlier.

Live longer, work longer
By comparison to other countries, retirement is often set at 64 or 65, sometimes 67, as is the case in Norway according to recent data from the OECD.

But the fact that people are living longer does not translate simply into an adjustment of the retirement age.

“There are cultural gaps amongst all these countries, with respect to work,” says Rochard. “In France, we have increased the workload for those between 30 to 50 years. People are worn-out. We have intensified work in a way that doesn't beget more productivity."

Working longer is not an option, he stresses, as the workload as it already stands is "no longer barable".