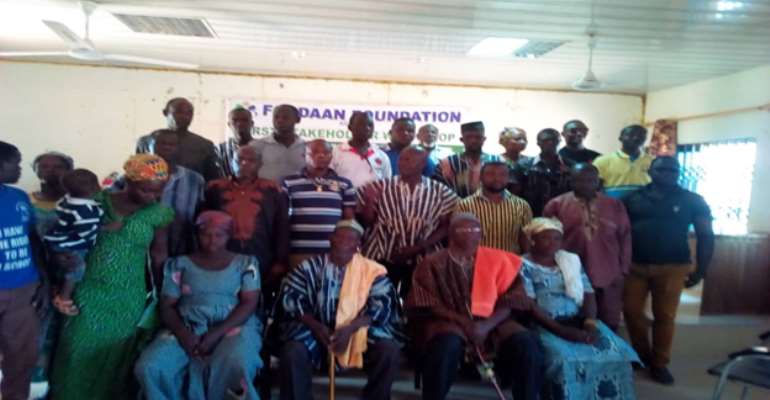 Participants at the forum

Bunkpurugu (NE/R), Dec 17, - A research on the Bimbagu River in the Bunkpurugu-Nakpanduri District of the North East Region has recommended that the Assembly pass a by-law to protect banks of rivers and water bodies in the area to continue to serve the people.

The research has also expressed need for the Assembly and various stakeholders in the area including traditional leaders and youth and women’s groups to undertake public sensitisation on the effects of cutting trees along river banks and its consequences on the communities.

It also said the Assembly should lead the riparian effort by organising education and sensitization campaigns in the affected communities along the Bimbagu River on planting of trees to restore the vegetation along the river banks.

The research, which was presented at a stakeholders’ consultation workshop at Bunkpurugu, was conducted from February to June, this year, by Foadaan Foundation with support from Business Sector Advocacy Challenge Fund (BUSAC Fund).

The workshop was to engage traditional authorities to encourage their people, who farmed along river banks to reserve river banks for restoration of vegetative cover as well as encourage community members to plant selected trees as re-enforcement to help retain water in the river.

The Bimbagu River serves about 88 per cent of the people in the area, who rely on it for domestic and agricultural purposes.

The research found that activities such as cultivation of the river banks as farmland, cutting down the trees for firewood, silting of the river through dumping of refuse and plastics into it, and bush burning caused the Bimbagu River to dry up immediately after the rainy season leading to difficulties in accessing water in the area.

It, therefore, called on the Assembly to pass a by-law on protection of water bodies in the area and set up a Task Force to implement the by-law by enforcing it to safeguard the situation.

It recommended that the Forestry Commission (FC) and the Environmental Protection Agency (EPA) should organise workshops at the District level where stakeholders including the community leaders would be educated on tree planting and management to protect the environment.

It said “Also in the implementation of the riparian policy, the EPA and FC should ensure that the right type of tree seedlings and the relevant procedures are followed in planting those seedlings along the river banks”.

Mr Jacob Konlaa, CBunkpurugu-Nakpanduri District Coordinating Director expressed support for the advocacy activities to protect the Bimbagu River urging traditional authorities to educate their people on the issue to save the water body.

Participants, who included traditional authorities, youth groups, women groups, and opinion leaders in the District, pledged their support to lead the advocacy in their communities to ensure success.