If I Had Enough Resources To Award A Meaningful Prize!.... 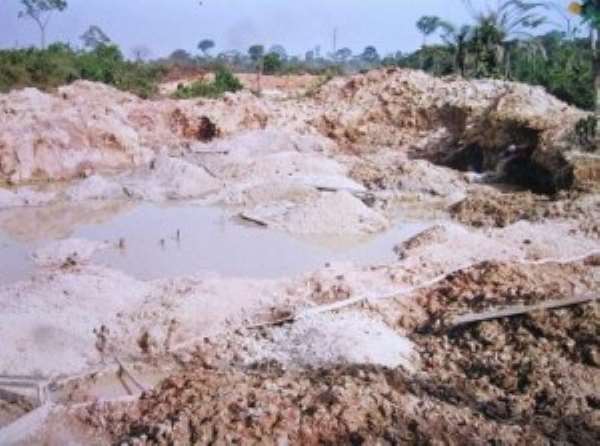 In recent articles, have been crying quietly in my heart over the fact that although Ghana's water-bodies are being totally destroyed by galamsey operators, our media are only paying scattered and sporadic attention to the problem.

I have offered the media several suggestions on what they should be finding out about; for instance: why those who bail galamsey operators arrested by Operation Vanguard personnel, are not named and shamed. This conspiracy of silence is perpetrated by our media in spite of the fact that the ability of the arrested people to contact influential people to bail them out provides incontrovertible prima facie evidence that the influential people must know something about how the galamsey personnel are recruited, equipped and paid.

Sometimes, arrested galamseyers are not even taken to the courts at all, but are intercepted by powerful individuals who go to police stations and Immigration Department offices and lean on, or bribe these law enforcement agencies, to allow the arrested personnel to go free.

Quite often, Operation Vanguard personnel are able to seize excavators, bulldozers and chanfang machines used in galamsey operations in our rivers and streams, as well as our cocoa and food farms. Chanfans, for instance, can only be used to devastate rivers. So they should, by logic, be destroyed at sight. Yet they continue to exist in our countryside! These are all matters the media – especially the electronic media – should be concerned with.

Also, the public has been told that tracking devices are to be attached to excavators and bulldozers used in the country, so that their movements can be monitored to provide evidence that they are being used for legitimate purposes (such as building roads or other projects) and not for galamsey. But where is the information to show that such new progressive steps ARE ACTUALLY BEING taken to clobber galamsey?

These matters should trouble us a great deal because if you watch the international television news, you will see that in places like Australia and California, climate change is already causing huge and deadly fires. With all their technical know-how, the authorities there cannot adequately fight these fires. What would WE do if such fires were to break out here? Yet, we live in the tropics (where global warming is progressing by leaps and bounds.)

Worse, we have actually seen what fire can do to our forests and rivers. Remember 1982-84? The drought was so bad, and affected our power-generation capability so seriously that our newspapers were obliged to publish each day, on their front pages, the “water-level” as measured in our largest dammed river, the Volta. I remember one helicopter pilot engaged in fire-fighting in those days telling me that he had never “thought it possible that fire could crossa main road and cause damage on both sides of the road”!

It does not take rocket science to make us realise the sort of trouble we are heading for by just being placed by Nature in the tropical zone of Planet Earth. Yet, in our stupidity, we are worsening matters by destroying our water sources, which will be affected by climate change whether we like it or not! Isn't it madness to be deliberately inviting a potential water shortage for ourselves by allowing people without a single ounce of patriotism or common sense in their being to ruin our rivers, streams and water-bodies at a dangerous period like this in world history?

Some of our journalists are among the finest in the world. And so are many of our University lecturers. And yet we are sleep-walking into a deadly trap that can lead to self-inflicted genocide – no less!

But one of the more pleasant things about Ghana is that you cannot always take it for granted as a country. And on Monday, 16 December, 2019, this became a proven fact to me.

On opening the Daily Graphic of that day, I was rushing through the pages, as usual, quickly running from advertisement to public relations buff, scowling all the time, when I reached the centre spread of the paper. And there, springing up before my eyes, was the sort of display that the Graphic used to be noted for in the past – a vivid feature, with excellent pictures, in which a reporter was presenting a gripping eye-witness account of something going on in his country. Here is a link to the article: www.graphic.com.gh/features/features/galamsey-when-a-national-asset-becomes-a-curse.html

To say that the article, written by TIMOTHY NGNENBE bowled me over is to engage in under-statement. it was the sort of article I have silently been praying that some Ghanaian journalists would write, so that the anti-galamsey struggle would not become what Ghana's snobbish literate classes snootily dub as “the issue” (!!) of some particular individual or other.

I shall tell you more about TIMOTHY NGNENBE later, but right now, I want you to read some of the things he wrote and for which I would award him a glittering prize – if I had the resources to do so.

Here is part of what he wrote:
QUOTE: GALAMSEY – WHEN A NATIONAL ASSET BECOMES A CURSE

“We have a serious situation here. Our lands that provide us with food is being destroyed on a daily basis; we can no longer drink from the Tano and other water bodies that quenched our thirst; our cocoa farms are being destroyed.“If you go to our towns and villages and see the extent of destruction illegal miners have caused to our land, cocoa farms and water, you will weep.” These were the lamentations of the Paramount Chief (Omanhene) of the Aowin Traditional Area in the Western Region, Beyeeman Tano Kwawu Benbuin III,..

“The residents complained that several acres of cocoa farms had been destroyed by the illegal miners, while rivers such as Tano, Boin, Dusoe, had all turned milky-brown as a result of the indiscriminate mining activities. It was clear from my interaction with the residents of the Aowin municipality and other communities in the Western and Central regions that galamsey is an albatross around their necks...

“It is sad that children, as young as six years, engage in illegal mining. Many of them spend their nights at galamsey sites and sleep in the classroom during the day when lessons are ongoing.” One parent said she had “not set eyes on her son for about a month... . As I speak, I don't even know where he is.”

“At Breman, Brofoyedru, Denkyira Obuasi, all in the Upper Denkyira West District, cocoa farmers [say] illegal miners have destroyed their cocoa farms: "The galamsey boys have dug pits in our cocoa farms,... Because of the onset of the rains, the road leading to our farms are flooded and we fear to even go to the farm because you could end up falling into a mining pit,"

“Meanwhile, the leader of the Operation Vanguard team in the Eastern Region, Major John Majeed Balou, said although the team had managed to arrest 31 of the galamsey operators, they appeared handicapped because there were some insiders who were frustrating their efforts. “Before we even move to the illegal mining sites, our own people call to tell the galamseyers that Operation Vanguard is coming so they take cover,” he said.

“This revelation by Major Balou has solidified an earlier claim by the leader of the Aowin South Concern Youth Association, Mr Patrick Afful, that there is a cartel behind the illegality. Mr Afful had said: "I can tell you that chiefs, politicians, security officers and some collaborators take their percentage of the booty that galamsey operators get, so they do everything to shield them.” UNQUOTE

Please read the full article by Timothy. And do write to his Editor to tell him that you agree with me that Timothy should be given a worthy prize for writing such a good piece about a matter that should be of great concern to our Nation!