By Shahzad Abdul and Nina Larson 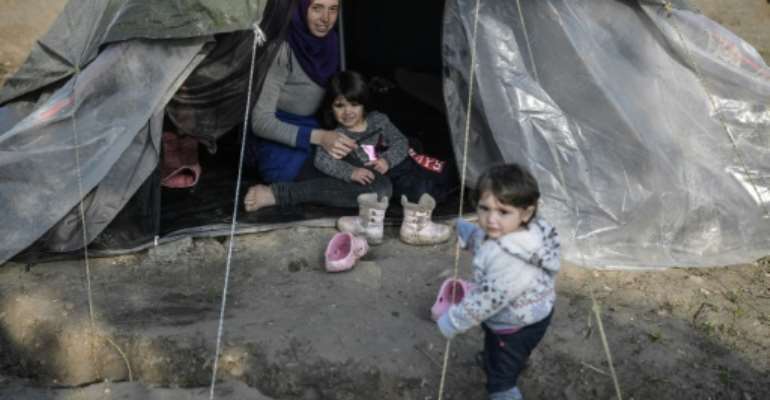 At the end of 2018, nearly 71 million people were living in forced displacement due to war, violence and persecution. By LOUISA GOULIAMAKI (AFP/File)

The UN urged countries Tuesday to take joint responsibility for caring for surging numbers of displaced people, while wealthy nations faced criticism for not shouldering their "fair share" of the burden.

UN chief Antonio Guterres opened the two-day Global Refugee Forum in Geneva with a call for a more equitable response to refugee crises.

"The world owes all countries and communities that welcome large numbers of refugees a debt of gratitude," he said but added that "gratitude is not enough."

"The international community must do far more to shoulder this responsibility together."

The forum, which will last through Wednesday, begins exactly a year after the UN General Assembly adopted a framework aimed at creating a more predictable and fair approach to providing assistance to refugees and host communities.

The meeting is the first of its kind, pooling together heads of state, government ministers as well as business leaders, humanitarians and refugees themselves.

A full 80 percent of the world's refugees live in poor and developing countries, which often feel left to bear the heavy economic and societal toll alone.

Turkish President Recep Tayyip Erdogan, whose country is the world's biggest refugee host, hammered the demand for wealthier nations to do more.

He stressed that Turkey was currently hosting some five million refugees, including around 3.7 million Syrians, and had spent around $4 billion (3.5 million euros) to accommodate them.

At the same time, he added, wealthy nations had set quotas to accept only "tiny numbers" of the many fleeing their homes and had largely failed to honour their pledges of financial support to Ankara.

"Nobody seems inclined to help us," he said, suggesting that a lack of support had pushed Turkey to carry out its recent incursion into northeastern Syria to carve out a so-called safe zone to facilitate refugee returns.

Turkey has clashed with the EU over October's Syrian offensive against Kurdish fighters, prompting Erdogan to repeat his threat to allow millions of refugees to head to Europe.

Leaders from other countries hosting large numbers of refugees, including Costa Rica, Pakistan and Ethiopia, also stressed the need for more solidarity.

"We do need help to fulfil our task. If not we will be failing the most vulnerable," Costa Rican President Carlos Alvarado Quesasda told the forum.

"Yet the hospitality of those countries receiving most refugees has often been eclipsed by manufactured panic in other parts of the world," he said.

"We see refugees who have fled for their lives being demonised and turned into figures of fear," he said, denouncing those "making political capital by stoking public anxiety."

During the forum, more than 700 pledges are expected from countries, organisations and businesses, including financial donations, but also technical and material assistance, legal and policy changes meant to help ensure greater inclusion for refugees.

These could include things like making it easier for refugees to get an education or work.

The UN said it was also hoping for more resettlement spots in third countries for vulnerable people already living as refugees, and moves to ensure safe returns to their places of origin.

Guterres insisted it was not enough for wealthy countries to open their wallets.

Wealthy countries also have an obligation to keep their borders open to people seeking asylum and to treat their claims fairly, he said, adding "we cannot have two worlds".

80 percent of the world's refugees live in poor and developing countries. By (AFP)

"Millions of vulnerable refugees are at risk or stuck in limbo because many countries are failing to shoulder their fair share of responsibility for protecting people forced from home," Oxfam chief Danny Sriskandarajah said in a statement.

Mohammed Badran, a 25-year-old Palestinian refugee who fled Syria's war for the Netherlands, meanwhile urged the international community to ensure concrete actions are agreed to and implemented.

Badran, who is among some 80 refugees attending the forum, told AFP he feared the event could become just another conference with lots of speeches but little action.

"We need actions and we don't just need empty words," he said.