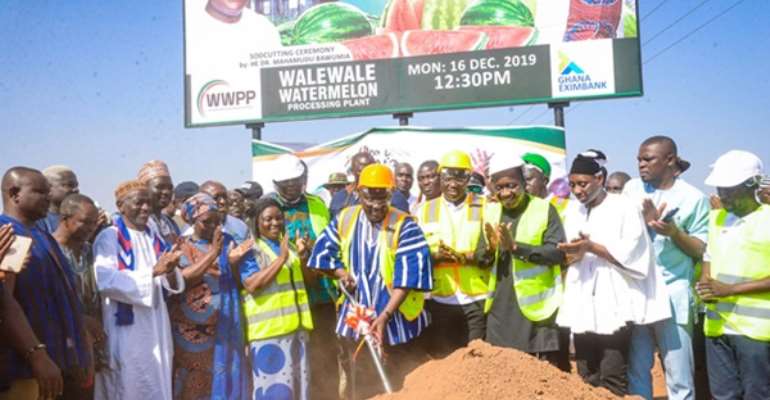 Vice President Dr Mahamudu Bawumia, has cut sod for works to begin on the construction of a Watermelon Processing Factory at Walewale in the North East Region, as part of Government's industrialization agenda of 'One District One Factory.'

When operational by the end of 2020, the factory will virtually eliminate the yearly ritual of huge post-harvest losses in the Watermelon growing enclave of Walewale and its surrounding towns and villages, and help improve the lives of the citizens.

The factory is expected to create direct employment for between 300 and 400 people and provide a ready market season after season for between 2000 to 3000 peasant farmers. The benefits of the factory to the local economy are enormous in terms of job creation and improving incomes of farmers, farm hands and drivers along the value chain.

Speaking at the sod-cutting event on Monday, 16th December, 2019, Vice President Bawumia indicated that construction of the Ghs35m Factory, which is being funded by the Exim Bank, is in fulfilment of President Akufo-Addo's efforts to reduce the phenomenon of rural-urban migration, and revitalize the nation's industrial base.

“The President pledged before Ghanaians his commitment to pursuing an aggressive industrialization and value addition to agricultural produce through the flagship 1D1F programme. Under the IDIF, about 181 factories are at various stage of completion with some 58 of them already completed. The progress made by government in line with this commitment is very significant for a 3-year old government,” he noted.

Vice President Bawumia urged farmers to take advantage of the setting up of the factory to scale up the farming of watermelon with the required standards, adding, “This is a dream come true. The fear of post-harvest losses will be eliminated by this factory. Farmers are also encouraged to explore all-year round farming in order to regularly feed the watermelon factory.

“With the construction of the Pwulugu multi-purpose dam, the prospects of agro-processing factories in the Northeast and the Upper East Regions of the country will be greatly enhanced.”

The Chief Executive Officer of the Ghana Exim Bank, Mr Lawrence Agyensaim, disclosed that Ghs100m has been set aside for the establishment of factories in the five northern regions, and his outfit is working assiduously with the promoters of these factories to ensure their speedy set up.

“Ghana Exim Bank is ready to support President Akufo-Addo's vision of One District One Factory. Just as we supported the construction of Ekumfi Juice factory, we are also supporting the construction of this factory and many more for the greater development of Ghana” he declared.

Vice President Bawumia had earlier cut sod for construction to start on an ultra-modern 100 bed hospital at Walewale for the West Mamprusi Municipality, to increase access to healthcare services in the North East Region and beyond.