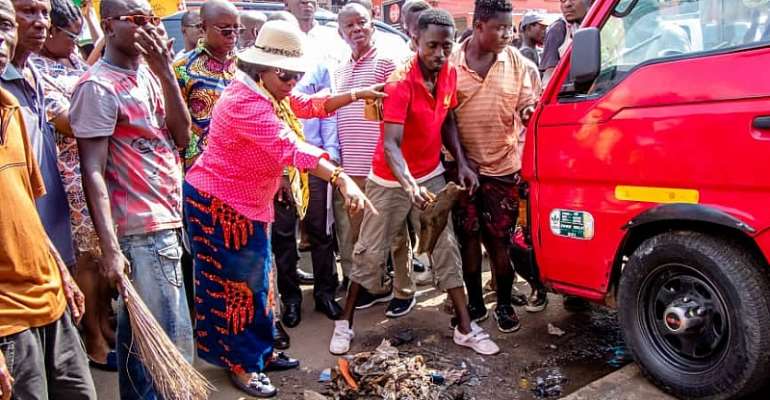 In line with her policy to constantly engage and interact with stakeholders on the field, the Sector Minister for Sanitation and Water Resources, Hon. Cecilia Abena Dapaah on December 8, 2019, began a three-day official working visit to Kumasi in the Ashanti Region.

She mentioned, in particular, the discussion to focus on the possibility of promoting the wide-scale treatment of waste in the Metropolis that will gradually do away with landfill sites.

The Sector Minister deplored the bad habit of people who litter the street even though street litter bins have been provided.

She called on the leadership of the Assemblies to enforce the bye-laws on Sanitation.

Hon. Cecilia Abena Dapaah expressed the hope that the deployment of the street litter bins by the Assembly with the support of the Ministry will go a long way to help promote cleanliness in the city.

The Mayor of the Kumasi Metropolitan Assembly, Hon. Osei Assibey Antwi received the Minister and her team of officials commended them for the visit.

He said though there were challenges, the Assembly was doing its best to ensure the city was kept clean. He promised to support the programs of the Ministry to achieve the President’s vision of a clean country.

The KMA Boss thanked the Ministry for the donation of street litter bins to the Assembly which he described as a timely intervention to support the efforts of the Assembly.

He promised the Assembly will take good care of the bins to prolong its life span.

The Kumasi Metropolitan Assembly received a total of 1,000 street litter bins from the Ministry.

The Sector Minister and her team of officials led by the KMA Chief Executive later toured some locations in the Metropolis.