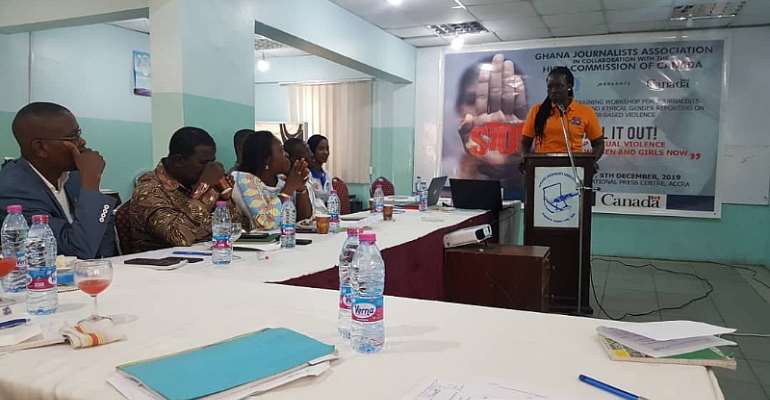 The Canadian government in collaboration with the Ghana Journalists Association (GJA) has organized a training workshop for journalists on responsible and ethical reporting on gender based violence in the country.

The workshop attended by journalists from 14 media houses was aimed at equipping the reporters with the requisite tools and skills on ethical reporting particularly on gender based issues.

Bertha Desmennu, Public Affairs Officer of the High Commission of Canada to Ghana, addressing participants during the opening session of the workshop, said journalists when sensitized gender issues can impact positively in terms of prevention and protection of victims of violence.

She said the media is an important stakeholder in the fight against gender based violence.

“The media has an influence on what happens behind closed doors and you can open the people's minds to the consequences of their acts or inactions.

The media can either reinforce the acceptance of these harmful acts or make them seem normal or even you can have a constructive influence through your reportage and have a positive impact on the lives of girls, women, men and boys.”

She maintained that journalists cannot play this role if they themselves particularly female journalists face the very same gender – based violence they are being encouraged to help fight in their workspaces.

She revealed that every year, from November 25 to December 10, Canada joins the United Nations Campaign dubbed “ 16 days of Activism against Gender Based Violence” to raise awareness and make a joint effort to emphasize that violence against women and girls is a serious human rights violation which should be ended.

“This year the global campaign focuses on rape and is calling upon people from all walks of life, across generations to take our boldest stand yet against rape.

Madam Eunice Ida Odonkor, Divisional Head of the Domestic Violence and Victim Support Unit, (DOVVSU) at the Ministries Police Station who gave a presentation on the topic, “raising awareness on all forms of abuses including sexual violence against women , girls and children,” urged journalists to always hide the identities of victims of domestic violence especially defiled and rape victims when reporting.

She said, the revealing of the victims' identities cause them emotional and psychological harm than the abuse they had suffered.

“When reporting on issues of rape and defilement, giving vivid details about the crime and victims further exposes them to public ridicule and harm and this go a long way to affect the victims involved.

Lawyer Kwame Dei Tutu , a private legal practitioner who took journalists through an understanding on the existing laws that relate to responsible ethical gender reporting and gender based violence, advised journalists to always consider the plight of victims of abuse and respect their rights as human beings.

He said reporting vivid on how a crime occurred especially in cases of robbery where victims were raped in the process often exposes the victims to public ridicule and hampers police investigations as well.

Lawyer Afua Addotey , head of the domestic violence management Board urged journalists to support the board fight abuse of women and children.