Gabon's Bongo set for return to world stage at summit 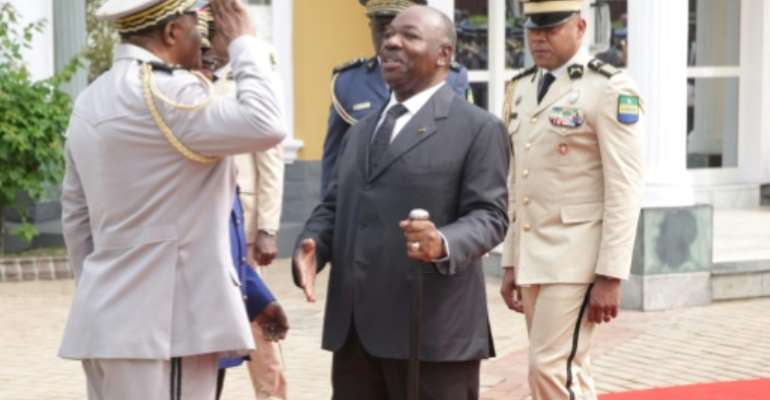 Bongo, seen here at a wreath-laying ceremony on August 16, sparked intense speculation about his fitness to govern after he fell ill with a stroke. He is scheduled to host an 11-nation regional summit on Wednesday. By STEVE JORDAN (AFP/File)

Gabonese President Ali Bongo Ondimba is scheduled to make a comeback on the international diplomatic scene on Wednesday, nearly 14 months after he fell ill with a stroke.

Bongo is expected to host a gathering of central African leaders, providing him with an opportunity to rebut domestic critics who continue to question his fitness to govern.

The extraordinary summit of the Economic Community of Central African States (ECCAS) was announced with just a few days' notice by cabinet aides to Bongo, who holds the group's rotating chairmanship.

Officials say the meeting will be devoted mainly to institutional change.

"Yes, this is his return to the international diplomatic stage," Foreign Minister Alain Claude Bilie-By-Nze told AFP on Monday on the sidelines of summit preparations in the capital Libreville.

"If bilateral meetings are excluded, this will be the first time he will be with heads of state (conferring) on a specific topic, CEEAC institutional reform."

The CEEAC aims to forge a common market among 11 states.

But it lags far behind similar bodies such as the Economic Community of West African States (ECOWAS) and the Southern African Development Community (SADC) in terms of regional integration.

Bongo, who has ruled the oil-rich equatorial country for 10 years, had a stroke in October 2018 while in Saudi Arabia, where he was hospitalised in Riyadh.

He was later flown to Morocco to convalesce and went back to Gabon last March, making few public appearances.

His return to his homeland has coincided with a major anti-corruption drive by the authorities.

Six of the CEEAC leaders have confirmed that they will attend the summit alongside Bongo.

While he was convalescing, Bongo's supporters put down a brief coup bid in January that challenged an elected family presidency that has ruled for more than 50 years.

Ali Bongo took over from his father Omar Bongo Ondimba, head of state from 1967 until he died in 2009.

Shockwaves have rippled across Gabon's political scene in recent weeks as Bongo has stepped up his public appearances, clearly appearing to be in better health.

Former presidential cabinet director Brice Laccruche Alihanga, has been dismissed and charged with embezzlement together with three former ministers.

Once seen as Bongo's closest aide, Laccruche was jailed on Friday, joining other senior government and administration figures who are also accused of corruption.