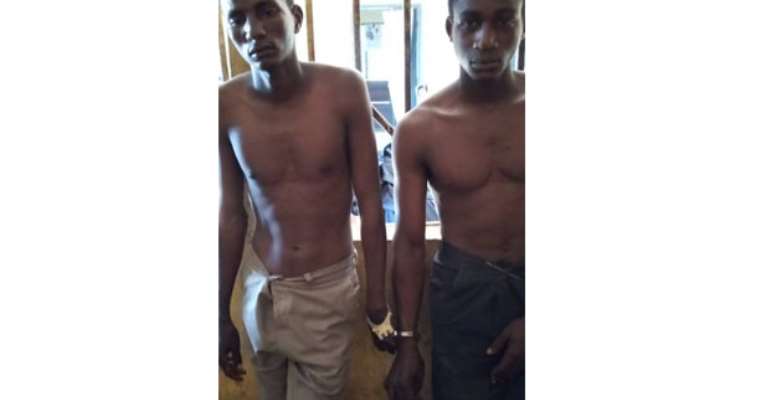 The two suspected robbers nabbed by the police

Two suspected armed robbers believed to be Fulani nomads have been grabbed on the Nakpei-Prang road in the Bono East Region.

Abdul Rahman, 27, and Amadu Huru, 35, according to the police, attacked 11 passengers on board a commercial vehicle with registration number AS 6930-09.

The Bono Regional Police Command said in a statement that on their way to Prang, the passengers were accosted by four armed robbers with guns and machetes and ordered them to surrender their money and other personal items.

They succeeded in taking away two smart phones worth GH¢450 and GH¢200 respectively, and two pieces of clothes valued at GH¢120, among other items, before escaping into a nearby bush.

The police said one Samuel Agyapong, a native of the area, assisted by others, arrested the two of the suspects on Saturday and handed them over to the Regional Police Command.

The Bono Regional Police Spokesman, Chief Inspector Kingsley Augustine Oppong, commended Samuel Agyapong and his team for arresting the suspects and bringing them to custody.