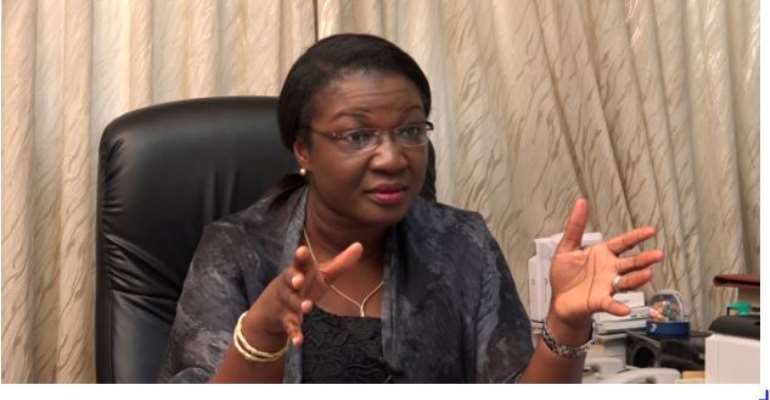 We journalists would have been hurt by the disparaging conclusion of Joyce Bawah Mogtari—that senior journalists who obliged the invitation of Jubilee House to pose questions to the President about his stewardship had sold their conscience—had that emanated from one of the intelligent members of the John Mahama team.

What else can we deduce from her unintelligent analysis of what transpired when the President fielded questions from a cross section of the media than regard her as a typical political nonentity. For want of something to say against anything emanating from the President in a desperate effort to be of political relevance, she has decided to embark on such a costly journey of courting the displeasure of journalists.

So soon Joyce has forgotten about how the same journalists she now regards subtly as imbeciles supported her to catch the attention of the public.

Although she caught the eyes of the Ghanaian public alright, she is hardly considered as one of the politicians with the ability to adduce convincing arguments.  Such insults, now her trademark, can only be spewed by a Joyce Bawah Mogtari.

To describe the 'question and answer' session during the encounter as choreographed is an insult which we think should be addressed with no holds-bar. A measured response would be in conformity with the demands of decency which she lacks anyway.

Indeed, we would have allowed sleeping nincompoops to lie but in the political realm any display of ignorance and imbecility deserves a response somewhat.

Joyce Mogtari has a long way to go in comprehending the political rope and so would continue to grope in the complex world of politics. She should have been doing better were she doing her political internship from anybody but the NDC flag bearer whose wobbling steps she appears to have imbibed, in fact infected with. But even he would not dare describe the session as choreographed.

Of course, Joyce is not a journalist and would not have had the opportunity of questioning the President.

Tough questions they were and for her to describe them as simplistic as she sought to do is an unsolicited mirroring of her infantile political posture.

Making the President happy with a 'question and answer' session as she claimed was the objective of the programme is, of course, bunkum that can only be spewed by Joyce.

The man who the President described as his former friend but who has joined his opponents on the other side of the aisle has not described the session as choreographed. He too asked a question. So who was denied an opportunity who demanded to? In fact, only Joyce in her myopic state sees it that way.

We have not forgotten about her abysmal performance when she and her husband were both given juicy government appointments—she as a deputy minister and her better half head of the Foods and Drugs Board. Who says the former President was not running a family and friends government?

The political field is a different kettle of fish, the shenanigans of which are unlike the family. Were we to desire a testimonial written about Joyce, we would have turned to Otiko Afisa Djaba who has first-hand information about the diabolic best of her.

Somebody who can cause a rift between a mother and her daughter is a dangerous person who should be shunned by all means and in every department of life. That is Joyce Bawah Mogtari for you.

We thought Joyce, a lawyer, watched the media encounter and so her points were hinged upon first-hand information.  For her to refer to social posts, therefore, as her source leaves us with nothing but to conclude that we are dealing with a person who is nothing but without mischief.