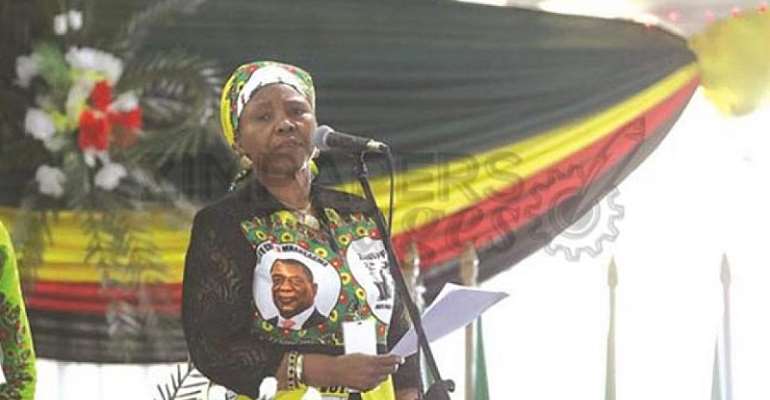 The chairperson of Zimbabwe's ruling Zanu-PF party, Oppah Muchinguri, has vowed to kick out high-profile members whom she accuses of getting rich on the back of the party and the people at the party's annual conference in Harare.

In her address to delegates attending the 18th annual Zanu-PF conference in Harare on Sunday, Muchinguri, who is also defense minister, condemned so-called “thieves operating inside the party”.

“Some are on the black market saying we are Zanu-PF, while others are invading mining claims in the name of the party, said Muchinguri.

Factional rift
“She's a very close ally to President Emmerson Mnangagwa and her remarks constitute a signal to people believed to be aligned to a faction opposed to his rule and pushing a different agenda within Zanu-PF”, says Xolisane Ncube, senior political affairs correspondent with Zimbabwe's Standard newspaper.

The Harare-based journalist says these people are “hoarding basic commodities, including essential drugs and selling them at high prices, and are believed to be behind the economic crisis the country is going through".

Also, the admission by the Zanu-PF chief that some of its elites are involved in mine invasions and sponsoring machete wars for their own benefit are said to have contributed to eroding the confidence entrusted in Mnangagwa after the army ended Robert Mugabe's 37-year rule.

Chiwenga factor
“There is a clique of cronies, or people claiming to be close associates of Vice President Constantine Chiwenga, abusing that proximity to advance their commercial interests," explains the Standard correspondent.

“These people believe he must be Zimbabwe's next leader."

Those building a power base around Chiwenga are considered by President Mnangagwa's supporters as responsible for the economic meltdown that has fueled crippling strikes over better living conditions across the country, says Ncube.

“What the Chiwenga people want to do is to fuel tensions within Zanu-PF and spark a popular revolt against the president's rule," he warns, while expressing reservations about Oppah Muchinguri's confidence that Mnangagwa will be the party's sole candidate come the 2023 general elections.

Military factor
Ncube points to frustrations within the military, especially young soldiers who pushed Mugabe out of power, who are now struggling with worthless wages.

He cites a recent incident at state house during which an officer disgruntled with the elite presidential guard opened fire, as indicative that things are not looking good for the president.

Savannah: NADMO to clear buildings on waterways after heavy ...
35 minutes ago