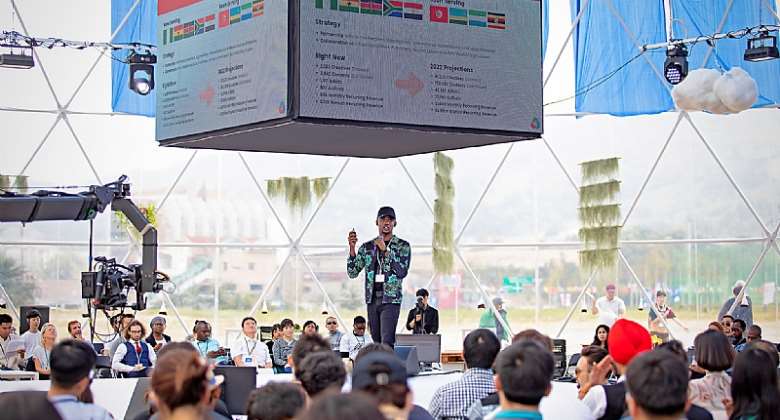 Chidi Nwaogu speaking about the work he and his team

This includes discovering and encouraging more female African writers, musicians, and filmmakers to get involved in creating and changing the African narrative.

The publiSHEr initiative will give female African creatives the distribution, protection, and promotion services of Publiseer at no charge, and allow them to keep 100% of the revenue generated from the sales of their creative works, as opposed to the typical Publiseer business model where Publiseer takes 25% the revenue generated.

"To solve this problem, we are introducing publiSHEr to incentivize more females to start creating, because Publiseer is there to support them. We will be giving them a hundred percent of the revenue generated from the sales of their creative content, as Publiseer will be letting go of the twenty-five percent we have always taken from sales. The publiSHEr initiative will be constantly evolving as we continue to discover new ways to bridge the gender imbalance gap in the digital media sector, and we hope more organizations join us to achieve this goal. Our new mission at Publiseer is to serve two million African creatives by 2030, and one million of them being female creatives."

Publiseer is a digital platform that helps underserved and independent African writers, musicians, and filmmakers. living in low-income communities. earn above the minimum wage and live above the poverty line from the sales of their creative works. Every day, Publiseer discovers local African talents and give them a platform to truly do what they love doing the most, which is to creative, while Publiseer handles the tedious business of transforming their creativity into wealth for them. Publiseer lets these independent creatives distribute, protect, protect, and monetize their creative works across over 400 well-established partner stores worldwide, at no charge, with just a single click.

Founded in August 2017 by serial entrepreneurs, computer programmers and identical twin brothers, Chidi Nwaogu and Chika Nwaogu, Publiseer is changing the African narrative through digital media. The digital content distribution company is promoting the beautiful culture and heritage of the African people to the rest of the world, one content at a time.