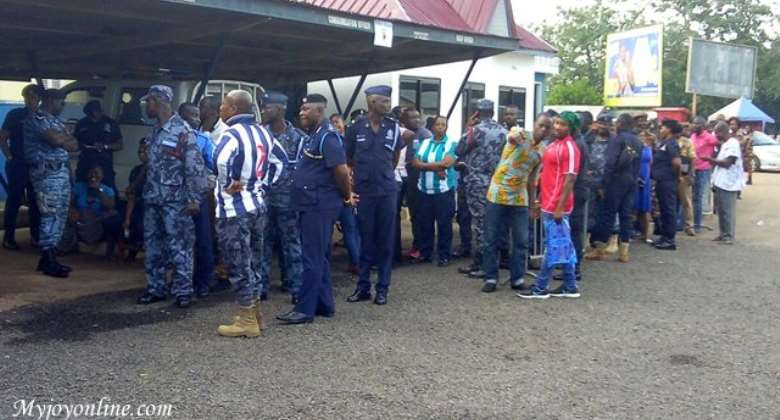 Over 50,000 Ghanaians are contesting the District Assembly and Unit Committee elections

Speaking to a combined force from the Fire and Police Service including personnel from customs and immigration, ACP Adjem said the success of the program will restore public confidence and trust ahead of the 2020 elections.

Although elections in Ghana are generally peaceful, pockets of violence, especially in conflict-prone areas have been recorded over time.

In October, a 19-year-old man suffered multiple machete wounds after he was attacked for allegedly ripping off the campaign posters of a rival candidate for the District Assembly elections in the Tema New Town community.

But addressing the personnel, the regional commander described the exercise as a test case for the personnel dispatched.

“ Today’s election is a test case for us. I am saying this because it also offers us an opportunity to do what we have been doing since the 1992 elections. It is an opportunity to use this as a dress rehearsal for the main one that comes on next year.

“One of our primary responsibilities as members of the security services is that we need to ensure the safety security of all election materials. We are also to ensure that voters queue orderly.

“If we come to your polling station and the queues are disorderly, and people are fighting, it means that you have not done your job properly, ” he said.

The Electoral Commission was hoping to organise three separate elections on December 17 including the referendum which sought to seek the approval of Ghanaians to amend Article 55(3) of the 1992 Constitution to allow political parties to sponsor candidates for local level elections.

But President Nana Akufo-Addo cancelled the referendum and also directed for the withdrawal of the Article 55 (3) Amendment Bill from Parliament as well as Article 243 (1) which was to allow Ghanaians to vote for their Metropolitan, Municipal and District Chief Executives (MMDCEs).

The President explained that he took the action because there was a lack of “national consensus” on the matter.