Major Mahama Had No Chance Of Survival – Pathologist 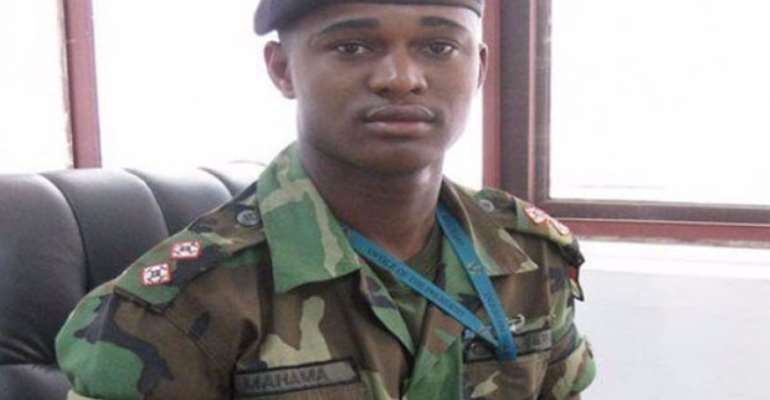 An Accra High Court yesterday heard that the late Major Maxwell Mahama had no chance at survival due to the multiple head injuries he suffered during his attack.

A Specialist Pathologist at the Korle Bu Teaching Hospital, Dr. Lawrence Edusei, who performed an autopsy on the body of the slain soldier, said there was a deep crack on the skull which almost separated it into two.

“I have not seen or heard anywhere that someone with that kind of injury will survive,” Dr. Edusei told the court hearing the case of 14 persons accused of the murder of then Captain Mahama (promoted to the rank of Major posthumously) who was on a detachment duty to Denkyira Obuasi (now New Obuasi) in the Central Region where the gruesome incident occurred.

The doctor was answering questions while under cross-examination by lawyer Patrick Anim-Addo, a defence counsel for two of the accused persons.

The lawyer sought to know from the medical doctor why he did not include in his autopsy report that the cause of death could have been from the fact that the late soldier was set ablaze.

He said the doctor had indicated in the autopsy report that about 54 per cent of the total body surface of the deceased was burnt.

The doctor rejected the lawyer's assertion and insisted that the person at that point although is alive was seconds away to death and, therefore, the petrol and fire would have no effect on him.

According to him, the final determination of the cause of death will only come after a thorough post-mortem is done.

This led to a back and forth between the witness (doctor) and the lawyer as the counsel insisted that the fire could have contributed to the death but the doctor stood by his earlier answers.

Lawyer: Is it likely that it is the fire that killed him?

Witness: No and a big no!

Lawyer: Did you consider the possibility that fire might have caused his death?

Witness: I did not consider it to be significant enough.

Meanwhile, the court presided over by Justice Mariama Owusu, a Court of Appeal Judge, sitting as an additional High Court judge, has refused an application for bail filed by lawyer for William Baah, one of the accused persons.

His lawyer, George Bernard Shaw, moving the application pleaded with the court to grant his client bail, saying the prosecution after calling 13 witnesses had not been able to establish a case against the accused.

He argued that it had been almost two years since he was arrested and prayed that the court considers his liberties and right to be presumed innocent until proven guilty.

The state represented by Frances Holain Ansah, a Principal State Attorney, opposed the application, saying there had not been unreasonable delays in the trial to warrant the accused person being granted bail.

She said considering the nature of the crime and the severity of the punishment should the accused be found guilty, he would not show up for the trial when granted bail.

Justice Owusu, in her ruling, said the trial began about a year ago and having regard for the actors in the case – 14 accused persons, six defence lawyers and a seven-member jury, she did not think the case had been unreasonably delayed after the prosecution had called 13 out of 14 witnesses.

She, therefore, refused the application and adjourned the case to January 21, 2020 for the state to call its last witness.