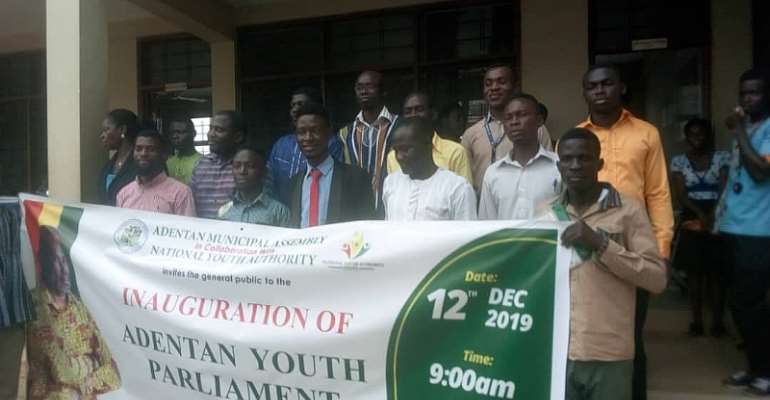 The Municipal Chief Executive (MCE) for the Adentan, Daniel Alexander Nii-Adumoah, has inaugurated a 30-member youth Parliament in the area to enable the youth deliberate on matters of importance for development and to tackle the high rate of youth unemployment in the community.

The concept is an initiative developed by the National Youth Authority (NYA) to engage the youth in the municipality on discussions pertaining to youth unemployment among other matters.

Speaking on the theme: “Youth Unemployment in the Municipality”, the MCE advised the youth to change their mindset towards issues pertaining to life and jobs, rather they should visualize agriculture as a lucrative venture to address the unemployment situation in the area.

He said, most of the youth in this era sees agriculture as job for the uneducated or illiterates which is why they are always seeking white color jobs.

The MCE noted that “this should not be the way to go because there must be a paradigm shift to allow for a change in perception."

Daniel Alexander Nii-Adumoah continued, “There are so many opportunities in the municipality that can create jobs for the youth but they live them behind and go looking for White color jobs. The Assembly is there to offer their support to any youth with a lucrative idea in the agriculture sector or other areas that can enable them earn a living, we need them to come forward.”

He therefore urged members of the Youth Parliament to focus, create a platform and discuss issues that would be profitable and enhance the living conditions of the youth and as well minimize the unemployment situation in the area.

The youth parliament consists of Speaker, Majority and Minority leaders who would rule over matters of interest for the benefit of the youth in the municipality.

The Speaker, Batintora Divine, promised to make the newly formed youth Parliament relevant among the youth to tackle the issues.

The leaders of both sides (Majority and Minority), Juliet Adjei and Ephraim Quartey, agreed to work hard to discuss issues that would add value to the lives of the youth, adding that, “the preparation and agenda setting towards this inauguration would help resolve issues affecting unemployment and the youth”