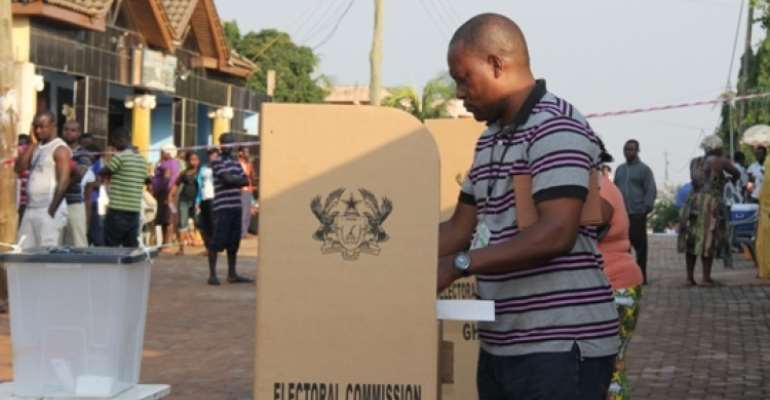 All is set for the district level elections today, as 57,030 candidates jostle to win seats in either the assemblies or the unit committees across the country, except in Nkoranza North, Nkoranza South and Lower Manya Krobo.

According to the Electoral Commission (EC), all the materials needed for the elections had been procured in sufficient quantities and dispatched to the various regions and districts.

"The District Assembly and Unit Committee Elections will come off as scheduled on Tuesday, December 17, 2019. Voting will take place from 7 a.m. to 5 p.m. All eligible voters are, therefore, urged to go to their polling stations to cast their ballots.

"Registered voters whose voter identity cards are missing can vote, since their particulars are in the final voters register," the Deputy Chairman of the EC in charge of Operations, Mr Samuel Tettey, stated.

“For the effective deployment of logistics and other election materials, the commission drew a detailed deployment plan to ensure the success of the management and deployment plan of its logistics to the regions and districts,” Mr Tettey explained at a press conference in Accra yesterday to update the public on preparations towards the nationwide local government elections.

He said that all Notices of Poll and ballot papers had been dispatched to the various regions and districts.

The term district level elections is used for the district assembly election and the unit committee election.

Both elections are held every four years to elect members to the assemblies and the unit committees. The tenure of the current members ended this year, hence the need for fresh elections.

Registered voters
Mr Tettey said 31,851 copies of the final voters register had been printed and dispatched, while 58,000 biometric verification devices (BVDs) had also been deployed to the various regions and districts.

“These include back-ups which will be used to replace BVDs which might develop faults at the polling stations,” he explained.

He added that well-trained technicians had been deployed to the regions and the various zonal centres to provide technical support for polling officials when necessary.

Referendum
The EC Deputy Chairman restated that the referendum to amend Article 55 Clause (3) of the 1992 Constitution had been cancelled and would not be part of the district level elections.

The withdrawal of the referendum also came with the cancellation of special voting ahead of today’s polls.

However, the EC has explained that special arrangements have been made for persons with disability (PWDs), the vulnerable, officials on duty, including journalists, among others, to cast their ballots without queuing.

Three districts
Mr Tettey said the assembly and unit committee elections would not be held in three districts — Nkoranza North and South and Lower Manya Krobo.

That was because the elections were held there last year, and that those places would hold the elections when the tenure of those in office ended after four years, he explained.

As part of the EC’s preparations towards the conduct of the elections, he said, it undertook some major activities, including a limited voters registration exercise, the exhibition of the voters register, transfer of votes and proxy, receipt of nominations and platform mounting for candidates.

Security
Regarding security, Mr Tettey said the EC had submitted the list of all polling stations across the country, including flash points, to the security agencies to enable them to deploy security men there today to ensure law and order.

The Ghana Police Service said it had deployed 48,000 officers and men across the country to ensure the orderly conduct of the polls.

In addition, 1,500 policemen have been deployed from Accra to support those in the six new regions and the Ashanti Region.

Accoutrements
In addition, Mr Tettey said, the EC had provided tactile ballot jackets to the ballot papers for the visually impaired.

Organisations and civil society groups which applied to observe the elections have been given their accreditation cards.

The Coalition of Domestic Election Observers (CODEO) has also deployed 1,100 people to observe and monitor the elections.

Out of the number, 800 would be stationed at selected polling stations across the country, while the remaining 300 would serve as roaming observers, CODEO said at a press conference yesterday.

Mr Tettey said voters would be required to leave the polling stations after voting and could return at 5 p.m. to observe the counting, adding that the collation of the elections would be done at the respective electoral area collation centres.

He said the winners of the two elections would be there to be declared so and copies of the final results posted at the electoral centres.