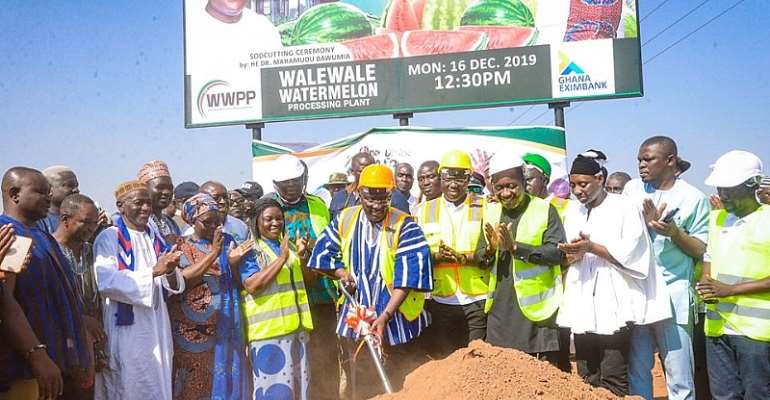 Vice President, Dr. Mahamudu Bawumia, has break ground for work to begin on the construction of a hospital for the West Mamprusi District at Walewale in the North East Region.

The Ghana National Petroleum Corporation (GNPC) is facilitating its construction.

Addressing the chiefs and people on Monday, 16th December 2019, Vice President Bawumia recalled the promise by the NPP to facilitate the delivery of quality health care, which has led to construction, completion and upgrading of several health facilities and the engagement of thousands of unemployed health workers, as well as improving the operations of the National Health Insurance Scheme.

“To improve health care delivery, the NPP led by President Nana Akufo-Addo promised to make health services accessible to every Ghanaian. Today, we are witnessing more than a fulfilment of a pledge. With the support of the Ghana National Petroleum Corporation (GNPC), the Walewale Municipality will benefit from an ultra-modern hospital. This will be the first of its kind in the North East region.”

“When completed, it will complement the already existing district hospital in the provision of primary health care to the people of the municipality and the region at large. We will continue to support the existing health facility as we have done in the past,” Vice President Bawumia pledged.

Speaking on behalf of GNPC, Dr. Kwame Baah Nuakoh, General Manager, Sustainability pledged his outfit's commitment to ensure the successful completion of the project in the stipulated period, emphasizing that a healthy populace is a wealthy one.

The Vice President had earlier cut the sod for work to begin on a Watermelon processing factory at Walewale as part of Government's industrialization agenda of 'One District One Factory.'

When operational by the end of 2020, the factory, facilitated by the Ghana Exim Bank, will virtually eliminate the yearly ritual of huge post-harvest losses in the Watermelon growing enclave of Walewale and its surrounding towns and villages, and help improve the lives of the citizens.

Vice President Bawumia also inspected ongoing works on an AstroTurf football pitch, which is 95% complete, and interacted with the contractor and workers.