UNITY IN DIVERSITY
By Charles Ollennu 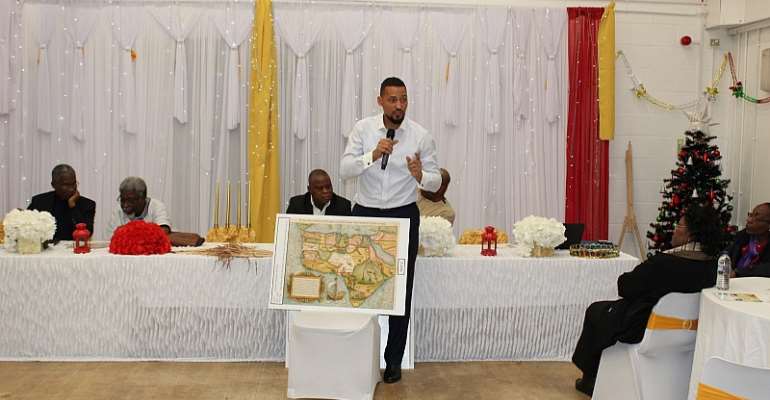 The La kpee UK Panel discussion on Indigenous Ga religion held on the 14th of December at the Chestnut Centre went very well taking into consideration the obvious conflict of interest since most of the speakers were Christians and the controversy it evokes as the Christian doctrine always prevails over all other considerations. No wonder some of the observations and conclusions made on the day.

However, the panel unanimously agreed that before the advent of Christianity, the Ga people had a religion which recognized the almighty God and rightly paid homage to him through the Dzemawodzii and actually saw no conflict of interest. Of course, until the advent of Christ, the Dzemawodzii were the mediators and intermediary between God and the Ga people but that changed with the fulfilling of biblical prophecy and the subsequent change of the old ways and introduction of a new order thereby making the Dzemawon as an intermediary obsolete because of the prophesy of Jeremiah.

Reverend Raymond Odoi who spoke on the topic LaKpa and Jesus Christ said, he was of the view that Lakpa is a deity of La believed to be the eldest son of God. He also said that Lakpa who is a Dzemawon had direct access to God and intercedes between the people and God until the advent of Jesus Christ when the old order was made obsolete.

According to him Hebrew Verses 8 through 12 contained a quotation from Jeremiah 31:31–34. This was offered as proof that God's intent was never to use the old covenant—the Levitical priesthood—to obtain the ultimate salvation of mankind. Rather, those rituals and laws were meant to point towards the eventual Messiah (Hebrews 8:5). Even the tabernacle was intended as an earthly symbol, or a "pattern," of the real altar in heaven (Hebrews 8:1–2).

According to the Reverend, before Christ, the old arrangement where ancestral shades and the spirit world intercede on behalf of its people was real, and valuable, but their ultimate worth was in their symbolism. Those were always intended by God to point towards a better covenant. Rather than something repetitive, earthly, and limited, God planned to offer something completed, personal and eternal through Jesus Christ. In conclusion, he said unfortunately that marked the end of the role of the Dzemawordzii since we now all have direct access to God through Jesus Christ.

Ade Sawyer’s topic comes with a lot of stereotypes which some Gas subscribes to. It has been well established that an account of African cosmologies must first come to terms with a set of issues likely to generate controversy. Foremost has been the scholastic predisposition to regard them as of less interest because of their supposed comparative simplicity and lack of theoretical sophistication in articulating visions of a cosmos generally, even in mythical terms.

It has been argued that the time is long past when scholars of Ga cultures could feel comfortable with cosmological and religious generalizations, supposedly common to all, on the basis of detailed studies of a few. Texts that were for too long taken as definitive accounts of African "traditional" religion are therefore challenged by new generations of scholars who reject the negative value judgments implicitly justified by cosmological paradigms derived from predominantly non-African sources. There is a growing consensus that Africa and Africans must finally speak for themselves, from the standpoints of indigenous believers, rather than defer to the potentially methodologically distorted interpretations of purely academic field-workers.

According to that tradition, death does not destroy the spirits of living things which are always in communication with the bodies they leave behind. The human body is believed to comprise three entities, the Gbomotso (body), Susuma (the spirit of man associated with dreams), and Kla (the sustainer of life). All people born on the same day have the same Kla and the same Kla name or day name. When the Susuma wanders about in dreams, the Kla stays behind to maintain life. If both the Kla and the Susuma leave the body together, the death occurs. If either the Kla or the Susuma leaves the body permanently, the person dies. When humans die, their Susumai (plural of Susuma) live on to become ancestral spirits always willing to help their descendants while the Kla may enter into reincarnation

The migration route and how it influenced Ga culture past and present was the topic by Daniel Desu.

There are so many accounts by historian and scholars on the migration route of the Gas. According to Daniel Desu, the Gas are part the Kwa people of Africa which include the Ga-Dangbe, Ewe, etc. According to him the Ga people migrated from Nigeria, he also showed a link through ancient maps that they were part of Israel that migrated southward through present-day Uganda, then along the Congo River, westward through Cameroons, Nigeria, Benin, Togo and finally to Greater Accra.

Danie Desu also agreed with A. Amartey that the Ga people of Ghana were believed to have once lived along the eastern part of the banks of the River Nile during the reign of Thothmes II, the then Pharaoh of Egypt, 1200 –1250 BCE. This was at the time when the Israelites had settled on the land of Goshen, from the eastern part of the River Nile to its estuary. He postulates that the Ga were part of the Nubians that left Egypt after being freed from slavery by the then Pharaoh Amenhotep II.

From there they sojourned. for some time, before moving on to the Boni Island in the Niger Delta Basin. He further posits that while in Nigeria, these groups once again separated, with one part moving west to the land of the ancient Benins, while the rest moved north-west to Ife in the Yoruba land. He then traced their movements from Nigeria through Dahomey (now Republic of Benin) and to Togo where they settled at Aneho, before eventually moving on to their present locations with map illustrations.

In his contribution, Dr Boye speaking on the topic Dzemawordzi, Wulomei And Mantsemei, said the concept of God, divinities and spirits in Ga traditional religious ontology has been so misunderstood by many scholars to the point of seeing Gas as people who did not know the Supreme Being nor worship Him. He said he now feels comfortable participating in Ga festivals and birth and other rituals because he doesn’t consider them as pagan practices.

Moreover, he tried to differentiate between a fetish (wọŋ) and a deity (dzemànwọŋ), by giving the definition of the latter as understood by the Ga people. In his opinion, the word that the Ga translate into a deity is dzemànwon (divine being or spirit of nature that moves around the world and the towns) and therefore concluded that it is different from wọn which is mostly associated with medicines and magic

In the indigenous religion, he said a dzemawon, or spirit, is a powerful intelligence that is omnipotent, omniscient, and largely unseen and intercedes between his people and God the almighty. Some are associated with places. They normally manifest themselves in an anthropomorphic form and can change shape at will. The people believe that they protect them and would punish if you go against his people. However, most dzemawon are beneficent and do not punish those who offend them accidentally.

Most Gas now however at least are now nominal Christians , but many combine elements of indigenous religion and Christianity. However, Dr Boye agrees with Rev. Ramond Odoi that with the advent of Christ the old order where God allowed deities like Dzemawodzii direct access to him as mediators became obsolete bringing the old order to a close and a new order with Christ as the only access to God.

Many people in the audience were at a loss as to that conclusion and how a proclamation by the Prophet Jeremiah could all of a sudden make a custom and tradition and cultural heritage of centuries-old become suddenly obsolete, a debate that dragged on for a while with Numo Kabu Charway, Horace Yemo and Shanco Bruce who were uncomfortable with that line of reasoning positing that Christianity can live side by side with indigenous Ga religion since it was our inheritance and therefore ought to preserve it and saw no conflict.

A culture that dies with its people it is said more so, you are stripped of your identity as a people they argued. Tony Davies a West Indian African also contributed saying though a Christian himself, and appears to know the Bible very well, he finds it preposterous that indigenous African religion is now obsolete by virtue of a foreign edict and even better a biblical edict.

It was proposed that the topic was not fully exhausted and that we should make time to explore the topic further. The day also marks La end of year Christmas party bringing the day to a gland finally. The Chairman of La kpee Dr Belinda Ago seemed very pleased from her reaction and I am almost certain that sooner than later there will be an encore and I will suggest a bigger venue, what a day to remember.