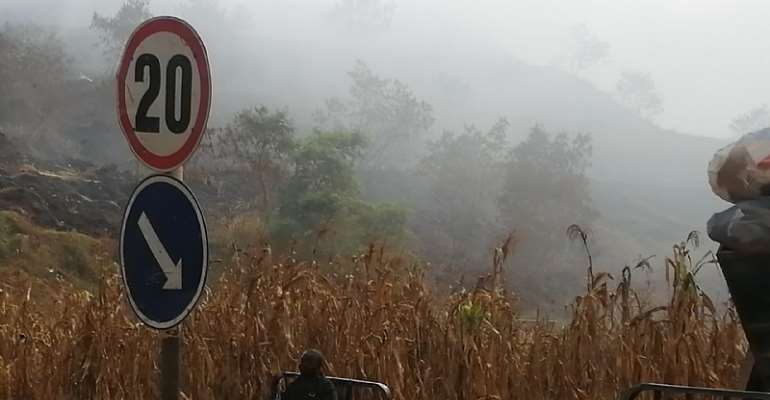 Authorities of the Kumasi Metropolitan Authority (KMA) are making frantic efforts to bring under control a fire that has been blazing at the Oti Landfill Site for nearly four days under control.

Although the cause of the fire is not immediately known, authorities are pointing to several factors including the heatwave coupled with combustible substances at the site.

The Landfill site, which is the destination for liquid and solid waste materials in the Ashanti Region, has over the years grappled with some challenges including the continuous breakdown of equipment.

Residents from six communities around the facility have often complained about the health hazards the site poses to them after they accused authorities of mismanaging it.

The fire at the facility started on Saturday, and it is still burning with thick smoke billowing from an old cell site that has assumed mountainous height.

Although the development may not affect waste disposal, tricycle operators who are engaged in a business of collecting and dumping refuse at the facility, are worried about the health risks from the billowing smoke.

According to the Chairman of the Tricycle Waste Collectors Association in the Ashanti Region, Salim Mohammed, “The fire officers came around with three fire tenders when the incident started. But due to the nature of the place they had to go back and properly prepare and come back. The fire has now come down, but our worry is the bellowing smoke”.

Public Relations Officer (PRO) for the Kumasi Metropolitan Assembly (KMA), Afia Konadu Aboagye said the Assembly was aware of the development and working to save the situation.

“It started Saturday dawn. We have been able to put it under control and we cannot really tell what caused the fire. When these trucks carrying the refuse come, we cannot tell whether there is fire in them or if someone is using a coal pot and when they are done cooking, they try some way to put off the coal, put it in their garbage and take it to the communal site and it is brought there. It could also be that when refuse is compacted for some time, it generates what we call methane and the heat will spark the fire. So, we cannot tell if it is natural or someone put the fire in their garbage and brought it there”, she explained

She further said the Assembly was collaborating with officials of the Ghana National Fire Service (GNFS) to ensure the fire is doused completely.

She also assured that the development was not going to affect waste disposal at the facility.

There was a disagreement between authorities at the Kumasi Metropolitan Assembly (KMA) and the Asokwa Municipal Assembly over who has the right to manage and control affairs at the landfill site.

The KMA has managed the facility for the past years until Asokwa was made a Municipality.

The landfill site falls under the jurisdiction of the Asokwa Municipality.