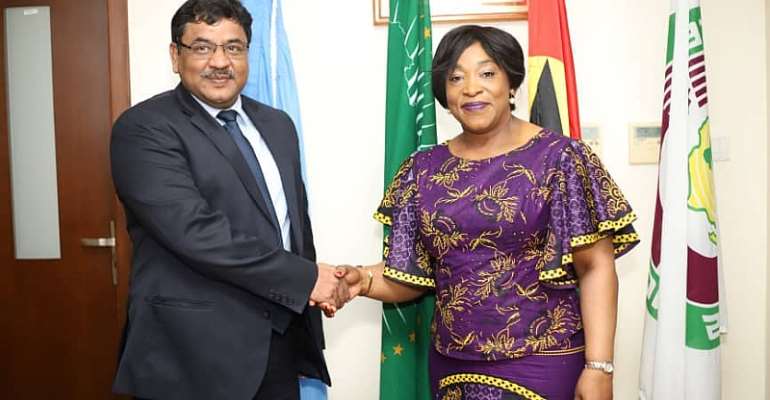 Mr. Yadav will be completing his duty as India's High Commissioner to Ghana on 3rd January, 2020, to assume his next assignment as Ambassador of India to the Republic of Iraq.

As tradition requires, he paid a farewell call on the Minister for Foreign Affairs and Regional Integration, on Monday,16th December, 2019.

During the meeting, the Minister
while congratulating him upon the successful completion of his duty, wished him success in his next assignment as the Ambassador of India to the Republic of Iraq.

She acknowledged the longstanding relations between Ghana and India dating back to some six decades ago.

She mentioned that during his tenure as High Commissioner of India to Ghana, relations between the two countries had gone a notch further at both bilateral and multilateral levels.

The Minister seized the opportunity to
convey on behalf of the Government and People of Ghana, appreciation for the considerable technical assistance the Government of India continues to provide to Ghana through various bilateral and multilateral programmes, including the Indian Technical and Economic Cooperation (ITEC) and Special Commonwealth African Assistance Plan (SCAAP).

She explained that the Indian side has implemented a number of major cooperation agreements and scholarships which have contributed tremendously to Ghana's development and improved the livelihood of Ghanaians through the awards of scholarships to a number of Ghanaian students to study in various universities and institutions of higher learning under the India Council for Cultural Relation (ICCR).

She called for an increase in the number of scholarships given to Ghanaians for capacity building programmes.

According to her, the Government has introduced technology into key sectors of the economy in order to build the productive capacity of the country, which includes; digitised address system, issuance of National Identification cards, mobile money interoperability system and paperless ports.

Furthermore, she mentioned that the Government of Ghana has embarked on its special initiatives such as One District One Factory, Planting For Food and Jobs, Value Addition, Skills Training Initiatives, One Village One Dam and economic transformation and request the Government of India's support and collaboration in these areas.

Again, the Minister expressed appreciation to the Government of India for its intention to construct Mahatma Gandhi Convention Centres in Africa and for considering Ghana as one of the countries to host the Centre in honour of the Venerable Leader Mahatma Gandhi.

Meanwhile, she urged the outgoing High Commissioner to be a voice for Ghana and to continue promoting the excellent relations between our two countries.