US urges Sahel countries to step up fight against jihadists 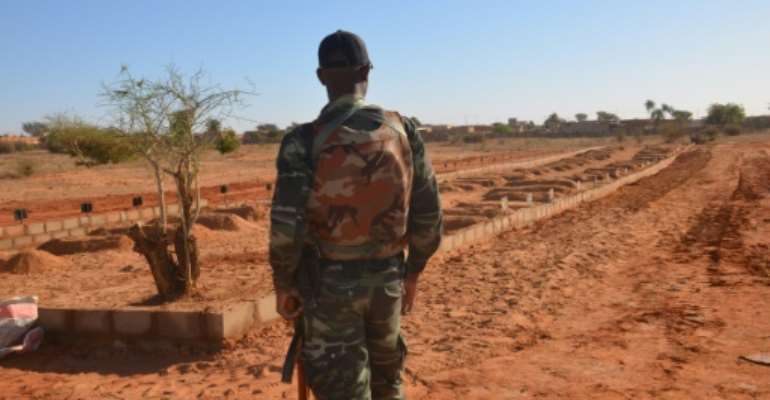 A Nigerien soldier looks at the graves of military personnel killed in a jihadist attack ahead of the arrival of G5 Sahel leaders on December 15, 2019. By Boureima HAMA (AFP/File)

The United States criticized countries of West Africa's Sahel region at the United Nations on Monday, saying their leaders were not doing enough to ensure stability amid soaring jihadist violence.

"A military response alone often fails to address the root causes of violent conflict," she said, adding that the US has provided more than $5.5 billion in aid in 2017 and 2018 to support long-term stability and security in West Africa.

Last week, hundreds of fighters attacked an army camp in Niger, leaving 71 people dead in the deadliest attack on the country's military since Islamist extremist violence began to spill over from neighboring Mali in 2015.

At the United Nations, Norman singled out Mali for criticism, noting the lack of progress in the country despite a peace agreement concluded in Algeria in 2015.

"We remain concerned that the government of Mali and the signatory armed groups have made little progress implementing the accord," she said.

"All communities in West Africa and the Sahel should enjoy inclusive, representative governance. This includes access to essential services and resources, and accountability for leaders who fail to meet these needs," Norman added.

Gathered on Sunday at an extraordinary summit called in the Nigerien capital Niamey, leaders of the G5 Sahel bloc composed of Niger, Mali, Burkina Faso, Chad and Mauritania called for more international aid to stem the jihadists.

"To fight terrorism, we need not fewer allies, but more allies," said Nigerien President Mahamadou Issoufou, whose country will join the Security Council in January for a two-year term.

Nothing Will Stop Gov't From Executing Pwualugu Multi-purpos...
32 minutes ago