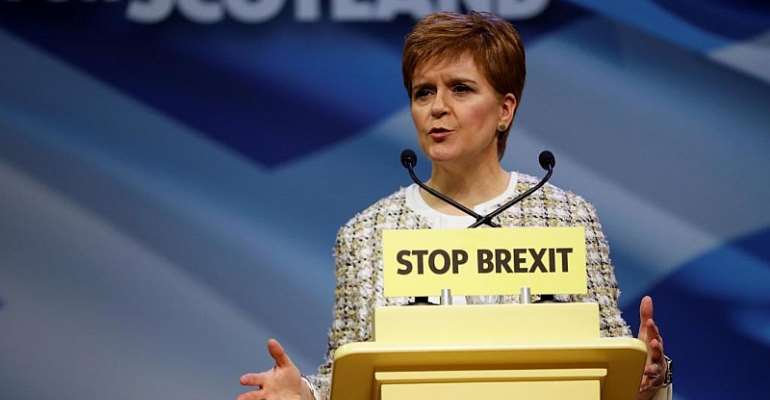 British Prime Minister Boris Johnson's resounding election win has renewed his commitment to "get Brexit done" and leave the EU. But there may also be another departure to worry about, as Scotland's First Minister Nicola Sturgeon has warned.

Johnson's commanding victory last week may help him to fulfil his Brexit campaign promise but it could also imperil the future of the United Kingdom of England, Scotland, Wales and Northern Ireland.

Scotland and Northern Ireland didn't vote for Brexit – and didn't embrace the Conservative electoral landslide. Now at least one of them may be drifting away from London.

In a victory speech Friday, Johnson said the election result proved that leaving the EU is “the irrefutable, irresistible, unarguable decision of the British people.”

Arguably, though, it isn't. It's the will of the English, who make up 56 million of the UK's 66 million people.

Brexit not for everyone
During Britain's 2016 referendum on EU membership, England and much smaller Wales voted to leave the bloc; Scotland and Ireland didn't. In Thursday's election, England elected 345 Conservative lawmakers   all but 20 of the 365 House of Commons seats Johnson's party won across the U.K.

In Scotland, 48 of the 59 seats were won by the Scottish National Party, which opposes Brexit and wants Scotland to become independent of the U.K.

SNP leader Nicola Sturgeon said her party's “emphatic” victory showed that “the kind of future desired by the majority in Scotland is different to that chosen by the rest of the U.K.”

Scottish independence and a second referendum

The SNP has campaigned for decades to make Scotland independent and almost succeeded in 2014, when Scotland held a referendum on seceding from the U.K. The “remain" side won 55% to 45%.

At the time, the referendum was billed as a once-in-a-generation decision. But the SNP argues that Brexit has changed everything because Scotland now faces being dragged out of the EU against its will.

Sturgeon said Friday that Johnson “has no mandate whatsoever to take Scotland out of the EU” and Scotland must be able to decide its future in a new independence referendum.

Johnson insists he will not approve a referendum during the current term of Parliament, which is due to last until 2024. Johnson's office said the prime minister told the Scottish leader on Friday that “the result of the 2014 referendum was decisive and should be respected.”

The Scotsman newspaper summed up the showdown Saturday with front page face-to-face images of Sturgeon and Johnson: “Two landslides. One collision course.”

“What we've got now is pretty close to a perfect storm,” said historian Tom Devine, professor emeritus at the University of Edinburgh. He said the U.K. is facing an “unprecedented constitutional crisis” as Johnson's refusal to approve a referendum fuels growing momentum for Scottish independence.