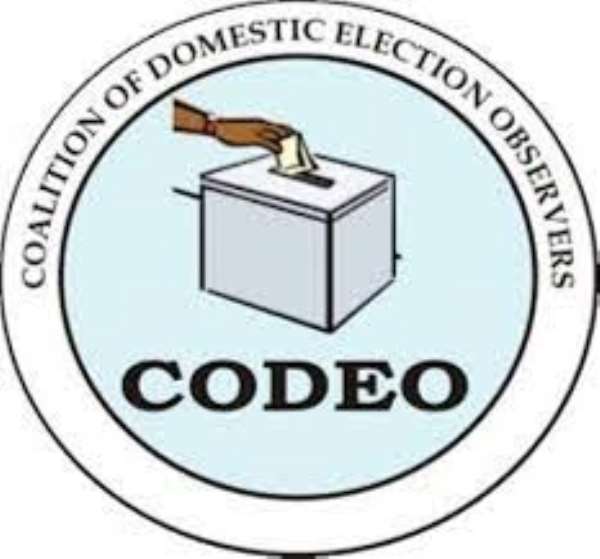 Ahead of the District and Unit Committee members’ election on Tuesday, December, the Coalition of Domestic Election Observers (CODEO) says it has deployed over 1,000 election observers to the various electoral areas.

This, CODEO says is to monitor the polls and ensure that the electoral processes go on smoothly.

Addressing the press, the Acting co-chair of CODEO, Sheikh Armiyawo Shaibu, urged the public to exercise their franchise on Tuesday.

“For the 2019 District level elections, CODEO will deploy about 1,000 observers comprising 800 stationary polling stations observers and 300 roaming observers on election day. To ensure that, CODEO’s information systems are ready for election day, CODEO carried out two simulation exercises for all its observers.

On election day, CODEO urges all voters to vote for competent persons regardless of age, gender, and disabilities. Electorates should also obey the electoral laws in the country to support free, fair and credible elections. “

All set for elections

The Electoral Commission also says all is set for the District Level Elections across all 16 regions except for 3 electoral areas in the Nkoransa north and south in the Bono East Region and Lower Manya Krobo in the Eastern Region.

Addressing the press, a Deputy Chairperson of the Commission in-charge-of operations, Samuel Tetteh indicated that all security measures have been put in place and names of some flashpoints have been handed over to the police for additional security.

For effective procurement and deployment of logistics and other election materials, the Commission drew a detailed deployment plan to ensure the success of the management and deployment of its logistics to the regions and districts. All election materials and equipment required for the District level elections have been procured in sufficient quantities and dispatched to the various regions and districts. They include materials such as qualitative stamps, ballot boxes, stationery etc.”

He further added that persons with disability must not be allowed to join long queues at the various centres.

On publicity about the exercise, he said enough radio and TV adverts have been done to sensitize Ghanaians about the elections.

“The Commission has submitted a list of all polling stations across the country including flashpoints to the security agencies. This is to enable them deploy security men to the polling stations on election day to ensure law and order.

The Chamber for Local Governance (ChaLoG) had asked the EC to postpone the elections over its plans to compile a new biometric voters' register ahead of the 2020 general elections.

According to the group, if the current register is not fit for use in the general elections then it cannot also be considered in the district assembly elections either.

In a statement, ChaLoG argued that both the district assembly elections and the general elections are of equal importance and as such much be organized with one accepted register.

“ChaLoG wishes to call on the EC to as a matter of urgency to postpone the upcoming District Assembly Elections, if it feels so strongly that the current Biometric Voters Register is very highly defective and therefore not credible to be used to conduct the 2020 General Elections which is nearly a year away.”