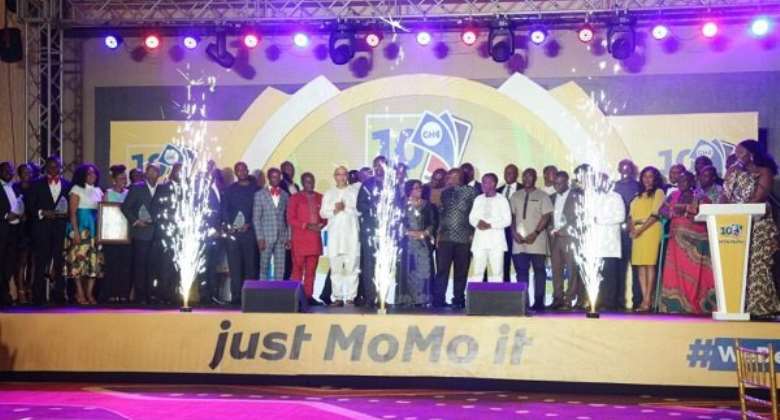 The awardees and MTN officials at the ceremony

MTN climaxed the 10th-anniversary celebrations of its Mobile Money service with awards dinner at the Kempinski Hotel in Accra.

Several institutions and individuals were awarded for their contribution to making the mobile money service introduced some ten years ago, a success.

Other categories were; the ‘MoMo Fintech Pioneer’ - IT Consortium, and CoreNett Limited, and ‘Emerging and Innovative Fintech Partner' – ‘appsNmobile Solutions'.

The General Manager of MTN MoMo, Eli Hini, expressed appreciation to staff of MTN and partners for contributing to the growth of the platform

Over 100,000 customers subscribed to the service six months after it was launched, however, it currently has over 14 million subscribers, out of which nine million were 30-days active users, he said.

He mentioned fraud as one challenge the network faced with the MoMo service, however, the company had invested heavily to control the canker.

The Finance Minister, Ken Ofori-Atta, in a speech delivered on his behalf, commended MTN for providing jobs for almost half of the population.

He encouraged MTN to work directly with microfinance institutions to drive growth of the financial sector.