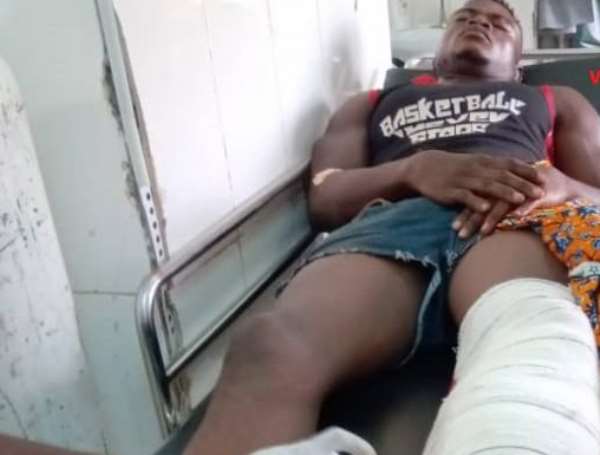 Lance Corporal Frank Amoako has been kept in police custody by the Western Regional Police Command for allegedly shooting a driver's mate at Kojokrom, near Sekondi.

Initial reports were that the policeman shot the driver's mate identified as John Essandoh in the leg over an alleged refusal to pay bribe at a police barrier at Inchaban, near Kojokrom.

An eyewitness told journalists that the policeman was on duty at the Ketan Police Barrier at about 3:15 am on Friday, December 13, 2019 and the mate was with his driver in charge of a DAF truck with registration WR 3059: 14, which was on its way from Takoradi to Tema in the Greater Accra Region.

On reaching the barrier, Lance Corporal Amoako who was on duty detected that one of the taillights of the truck was defective and in the process, he allegedly demanded GH¢150, but the driver who had then got down from the truck refused, climbed into the vehicle and drove away.

In the process of arresting the mate, the policeman's gun went off and hit the mate in his left leg.

However, in an interview with DAILY GUIDE, DSP Olivia Ewurabena Adiku, Head of Public Affairs Unit of the Western Regional Police Command, said investigations into the case to ascertain exactly what took place were ongoing.

“The police had not been able to take statement from the victim, John Essandoh, due to the serious nature of the injuries,” she added.

She confirmed that Lance Corporal Amoako had been placed in custody as a result of the shooting incident leading to the injuries of the driver's mate.

She said the victim was on admission at Korle-Bu Teaching Hospital for further treatment.