Our Roads Are Real — Bawumia 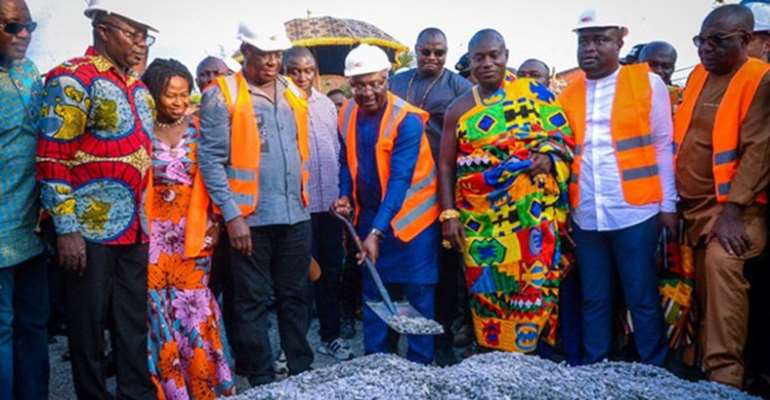 VICE-PRESIDENT Dr. Mahamudu Bawumia has said roads construction in the Ashanti Region and other parts of the country under the Akufo-Addo administration are real and not fake.

He said in times past, there was a political grouping in power called the National Democratic Congress (NDC) that was busily engaged in the construction of phantom projects which could only be found in its propaganda Green Book.

“President Akufo-Addo's government is not going to construct Green Book roads,” Dr. Bawumia jabbed the NDC when he cut the sod for the Rehabilitation and Auxiliary Infrastructure of Kumasi Inner Ring Road and Adjacent Streets Project, which was held at Kentinkrono Nsenee last Friday.

A total of 100 kilometres of roads would be rehabilitated under this project, which would include the construction of drains, culverts and roads in Kumasi.

The Vice-President said former President John Mahama and his NDC government continually lied in their Green Book that they had constructed a lot of roads, but the NDC has been exposed because almost every road in the country is in a deplorable state.

He said “the NPP government will construct real roads,” which would ease the movement of people and goods.

Dr. Bawumia said 55 million Euros, which is the project's cost, had been secured already hence the project would not encounter any financial challenges so Kumasi residents should not worry.

He said the government had realised that bad roads remain the number one challenge for the people of Ashanti Region, notably Kumasi. He gave an assurance that the NPP administration would do its best to solve the road problems.

Dr. Bawumia announced that government had already tackled a significant number of road projects in the region, including 70 kilometres asphalt project in Kumasi, which would be increased to 200 kilometres by 2020.

He said the country cannot transform as expected if the roads are in a deplorable state, for which reason President Akufo-Addo has declared 2020 as a year of roads.

The Minister of Roads and Highways, Kwasi Amoako-Atta, said the ministry was coming out with a policy that would ensure that contractors always delivered quality roads in order to ensure the longevity of roads in the country.

He appealed to residents of Kumasi to give the needed co-operation to the contractors so that they would be able to complete the roads on schedule.