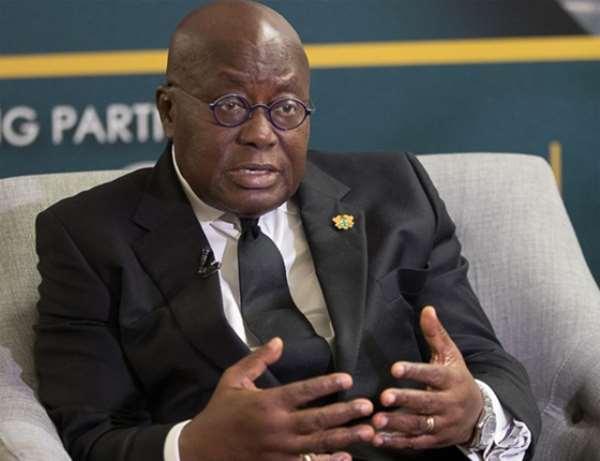 President Akufo-Addo has rekindled the debate that he is not corrupt by throwing a challenge to his opponents to mention his so-called corrupt deeds either in private or as President.

“I am certainly not corrupt. I continue to say that I am not corrupt; I have not been corrupt. I have not taken any money from anybody to give anybody any contract. It is not part of my arrangement,” the President boldly proclaimed last Friday in Accra during an encounter with senior journalists at Jubilee House, the seat of government.

The President made it clear that his posture towards the fight against corruption had not changed but said that he cannot also supervise an administration where due processes are not followed in the prosecution of persons accused of corruption.

He said there are some 21 former government officials who are currently on trial for corruption, with the amounts involved totalling over GH¢700 million.

“People are saying there are no prosecutions. Twenty-one people are on trial in Ghana today for corruption. One of the things that I am not prepared to do under any conditions is to do away with due process. I fought for it all my life in Ghana that we will have a state in Ghana which recognizes and accepts and acknowledges due process as a fundamental instrument of state policy,” he noted.

He said Ghanaians should be patient with the judicial process to deliver justice and fairness to all, saying “so, putting somebody before the court and that person is making application after application – whether it is to delay the process or whether the applications are genuine – you have to recognize his right to do it and it is when those are exhausted that the trial can begin. Some of the trials have started …”

President Akufo-Addo reiterated that he was not at the Presidency to shield appointees accused of corruption.

“It is not my job to clear or convict any person accused of wrongdoing, or of engaging in acts of corruption. My job is to act on allegations of corruption by referring the issue or issues to the appropriate investigative agencies for the relevant enquiry and necessary action. That is exactly what has been done since I assumed the mantle of leadership,” he stressed.

He said he had investigated every allegation of corruption levelled against any of his appointees, saying “if an appointee is cleared of any wrongdoing, the evidence adduced and recommendations made by these agencies, after the investigations are concluded, are what clear the accused persons, not myself.”

He said he would continue to increase budgetary allocations to anti-graft institutions for them to work assiduously in the fight against corruption.

“In 2019, there has been an increase in budgetary allocation from over GH¢16 million to over GH¢40 million for CHRAJ next year,” he disclosed.

He said he has only two relatives in his government and mentioned Finance Minister Ken Ofori-Atta as his cousin.

He also described the Finance Minister as competent and hard working; he touted his credentials and said he qualifies for that position.

The President said he is not the type that rubbishes opinion polls such as the Afrobarometer Survey that was recently done by the Center for Democratic Development (CDD) which had projected that the 2020 presidential election could go to a second round.

“My attitude to polls has never changed. The only poll that matters is the poll of the 7th of December; that's the only poll that matters. I'm not saying that if people do polling you then just rubbish it, no, that's not my view; you have to look at it, take it into account, analyse it and see for yourself what is being said,” he explained.

“We know of situations where lots of people did not predict of my being here (Presidency), or I will never be here; I'm here,” he said sparking spontaneous laughter. “You then have to worry yourself about one-touch, low-touch, whatever, but I'm not discouraged,” he added.

“For me what is important is my programme and the work that I'm carrying out because I believe it is beneficial to the people of Ghana and when the time comes for Ghanaians to comment, I'm optimistic and confident that it will be a good comment that they will make on the 7th of December, so I'm not discouraged about the afrobarometer.”

The President said his NPP government had done more than the 48% that IMANI Ghana rated his administration in terms of performance.

“I disagree with the 48 assessment by IMANI. I think we deserve much higher. We are looking at 72. We have a fundamental disagreement with that rating. Our figure is the one we are working with and it's the right one,” he said.