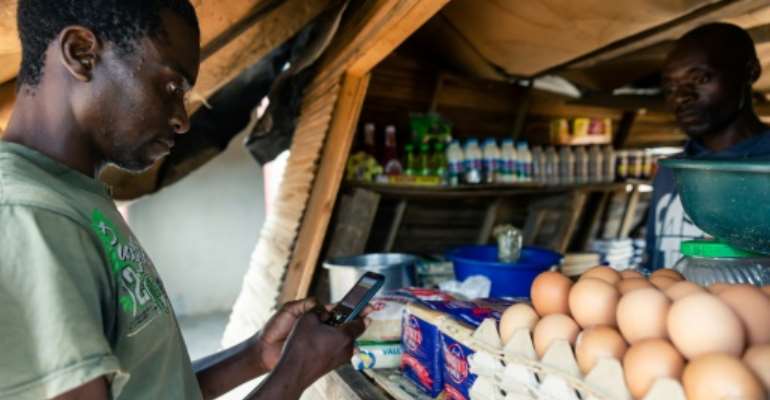 An SMS for the SOS: Aaron Munyoro receives $9 month in cash aid via his mobile phone -- a lifeline for his impoverished family. By Jekesai NJIKIZANA (AFP)

It's a meagre sum -- just $9 per month -- but for many families in poverty-stricken Zimbabwe, it is their last shred of hope.

The innovative scheme by the UN's World Food Programme (WFP), UKAID and Denmark's DanChurchAid (DCA) is helping thousands of urban households that each day face a struggle to survive.

"We used to fill the children's school lunch boxes with porridge, but now they get popcorn and crisps -- they are happy," said Anna Kubeta, a 63-year-old beneficiary.

The visually-impaired grandmother shares a cramped three-bedroom brick cottage with one of her adult children and four grandchildren, all of them school-going age.

Her 35-year-old son Aaron Munyoro, who has been unemployed for 15 years, receives the family's cash aid on his phone every month.

"Thanks to the cash transfers, their (kids') diet is less monotonous these days. We actually can afford some meat and flour," Munyoro said.

The combination of an economic meltdown and extreme drought has seriously worsened the plight of Zimbabweans, who were already struggling.

Nearly half of Zimbabwe's 15 million people live in a state of chronic food insecurity -- some 2.2 million in urban areas and five million in the countryside, according to UN figures.

In a visit last month, the UN special rapporteur on the right to food, Hilal Elver, warned that Zimbabwe was on the "brink of man-made starvation".

Epworth, an informal settlement some 15 kilometres (eight miles) southeast of Harare, is an area in desperate need.

Most of its residents are unemployed and have never had running water, sewage facilities or access to healthcare. Nearly 4,000 households are food-insecure, according to a survey.

"We hope that after the end of the disbursements, households are able to stand on their own through the resilience and livelihoods activities that complement their food security and income," said Chipo Chipudhla, DCA's programme head.

Anna Kubeta lives in the house with her 35-year-old son Aaron and four grandchildren. By Jekesai NJIKIZANA (AFP)

After aid dries up, she explained, many people are forced into dropping out of school, early marriage and prostitution as they have no other options.

Memory Ruvinga, a mother of three, said the cash transfer, combined with the farming, had enabled her to feed her family three times a day.

"I am getting US$45 to feed myself and the children," she said, standing in front of the brick structure where she grows her oyster mushrooms.

Her husband left home to look for work as an artisanal miner months ago when the family first signed up for aid, but has not returned.

"I can't reach him on the phone anymore, but it's alright, we are still getting his US$9 which means more food for the children."

Although the $2.50 she makes every three to four days from selling mushrooms brings relief from hunger, she cannot afford to keep her children in school.

"The two older ones are at home because their schools asked for some extra money which I do not have. The seven-year-old has never been to school because I cannot afford the fees," Ruvinga said.

While the electronic money has brought some relief to households, Munyoro complains that they lose a large percentage of it to the agents of the phone company, who charge a premium because of the chronic shortage of hard cash in the country.

An AFP reporter witnessed Munyoro being charged an extra 30 percent for his goods bought in a small grocery shop.

Memory Ruvinga and the mushrooms she grows as an additional source of income -- a scheme introduced by the Danish charity DCA. By Jekesai NJIKIZANA (AFP)

"We disburse the money in US dollars, but since the government outlawed the use of foreign currencies, they get the money in the local currency," said DCA's humanitarian programmes manager, Chido Susan Marimira.

The WFP's spokesman for sub-Saharan Africa, Gerald Bourke, told AFP that because of hyperinflation and the lack of hard cash, the organisation plans to revert to commodities and emergency food relief by 2020.

The Epworth pilot scheme has been such a success that it now encompasses eight urban settings, running until October 2020. Its target is to help 100,000 food-insecure people.

Witness confirms Dampare’s involvement in the arrest of Abua...
53 minutes ago