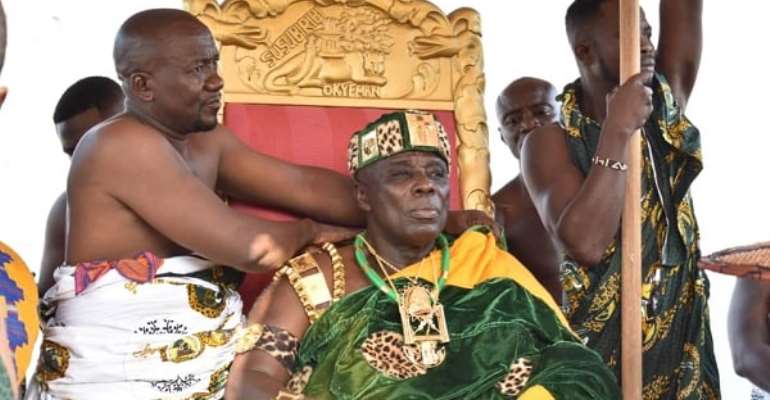 The chiefs and the people of the Gomoa Ajumako Traditional Area in the Central Region last Saturday held a grand durbar to climax their annual Akwambokese Festival.

This year’s festival coincided with the 10th anniversary of the Omanhene of the traditional area, Obrempong Nyanful Krampah XI, who is also the President of the Central Regional House of Chiefs.

The festival was instituted five years ago to bring all the chiefs in the traditional area together to celebrate and showcase their rich culture and tradition.

The colourful event, which was on the theme: “10 years of inspirational leadership and development”, attracted hundreds of people, including traditional rulers and personalities, as well as tourists.

The dusty nature of the Gomoa Ankamu-Gomoa Ajumako road did not deter the ecstatic crowd from joining the procession, amid the firing of muskets, drumming and dancing, as well as displays by Asafo companies and Mmensoun groups.

Others stood in groups along the main road and waved at their respective chiefs and queenmothers who were beautifully dressed in rich and glamorous Kente cloths and other paraphernalia.

Durbar
The durbar grounds went into a frenzy when the Omanhene, who was in a palanquin, arrived there around 2:55 p.m, after Nana Appiah Beduah II, the Mankradoheamaa of the traditional area.

The exhibition of traditional dance skills by Obrempong Krampah when he got to the durbar grounds was a delight to watch.

He said the situation had put some fear in drivers and motorists who plied the road, particularly at night, adding: “It has become necessary that the police increase their visibility on the road to protect drivers and commuters.”

On politics, the chief urged the leadership of political parties to help reduce the tension in the country in the round up to the 2020 general election.

“We have only one Ghana and we must consciously work hard to protect and guard its peace and stability,” he added.

Commendation
Obrempong Krampah commended successive governments, chiefs and the people for their immense support throughout his reign, which he said had contributed to the growth and development of communities in the area.

He also expressed appreciation to the government for the introduction of the free senior high school (SHS) policy, which he said had reduced the pressure on parents in their quest to provide secondary education for their children.

According to him, he had so far settled about 40 chieftaincy disputes to ensure the accelerated development of the entire Central Region.

Support
The Central Regional Minister, Mr Kwamena Duncan, called on the people to support the government in the implementation of its policies and programmes since it would inure to their benefit.

For instance, he said, the construction of two landing beaches at Gomoa Fetteh and Mumford had begun in earnest, and that the government’s decision to prioritise education had also led to the decentralisation of government scholarship, with GH₵200,000 spent on beneficiaries in the three Gomoa districts.

The minister said beneficiaries of the school feeding programme had also increased from 310 in 2016 to 920 in 2019, with the objective of covering more schoolchildren in deprived communities.

The MP for Gomoa West, Mr Alexander Abban, gave an assurance that work on the Gomoa Ankamu-Afransi road, popularly referred to as the ‘Gomoa highway’, would be completed on schedule.