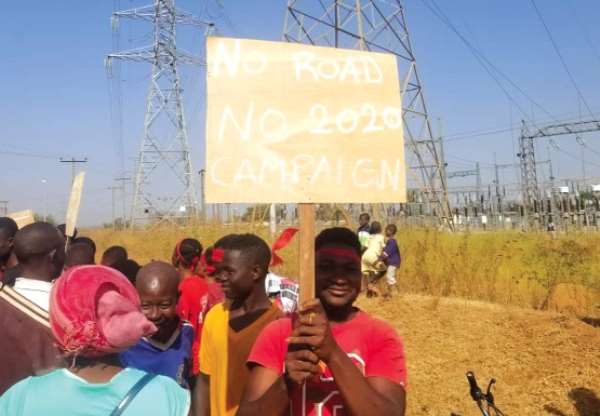 A number of youth from six suburbs in the Bolgatanga Municipality of the Upper East Region last Friday embarked on a street protest to compel the government to fix the dilapidated road network in the six communities.

The youth further asked the government to, as a matter of urgency, fix the roads in Tanzui, Zorbisi, Sokabisi, Yikene, Dorongo, and Shirigu otherwise the affected communities would not participate in the forthcoming district level elections.

Delivering a petition on behalf of the youth in Bolgatanga, a spokesperson for the group, Mr Peter Akurugu, said that “the road in question is the only major and strategic route that connects the six communities to the Bolgatanga Central Market, the Regional Hospital, schools and other important public places.”

He explained that the road started from the Tanzui community and linked Shirigu, a farming community, and the food basket of the municipality.

Efforts and effects
“All efforts by the youth, and the good people of these communities to draw the government’s attention to the bad state of the road have been in vain, also the use of community durbars, involving key government officials and strategic duty bearers, together with radio talk shows, to register our frustrations over the deplorable nature of the road have all fallen on deaf ears.

It is on the back of this that today’s demonstration is born,” Mr Akurugu said.

“Due to the several years of neglect, coupled with perennial rain water erosion, the road has become very narrow, making it extremely difficult if not impossible for vehicles from opposite directions to navigate on the road.

This trend of events has often led to accidents with their attendant casualties,” he pointed out.

Mr Akurugu, therefore, warned that if the road was not fixed, the youth might put in place some measures to prevent Zoomlion waste trucks from using it.

“No single day passes without one or two accidents being recorded on the road. I can state without reservations that in the last six months, as many as 10 people died on the road due to accidents.

The latest that sent shivers down the spine of everyone was the one which saw three energetic young men dying on the spot,” the spokesperson stated.

Nature of road
“I am of the conviction that if the road is not fixed within the next one week, you can be sure that many more lives will perish on the road because we have just recorded two serious accidents and the victims are in a critical condition and we are afraid that with Christmas at the corner, more people will be maimed to say the least,” Mr Akurugu said.

The common means of transportation used in the municipality is the tricycle, commonly called Cando. Mr Akurugu said operators were compelled to increase fares because the roads were completely unmotorable and made them experience frequent breakdowns.

“Pregnant women who are conveyed to the hospital in these Candos experience miscarriages.

I am a witness to two bizarre miscarriages and this is heartbreaking,” he said.

“No one should misconstrue our action as being politically motivated; we are a discerning and objective group of people and this action is motivated by the hazards and dangers the bad state of the roads pose to residents in the six communities,” he added.

Sour
Events, however, turned sour when after the youth had presented their petition to the Upper East Regional Minister, Ms Tangoba Abayage, some police personnel reportedly stormed the Regional Coordinating Council to disperse the group, some of whom were returning to their respective homes after the demonstration.

Sources at the Upper East Regional Police Command indicated that the group had defied the Public Order Act, which required that any group of people who wants to embark on such exercises should inform the police five clear days before the event.

The youth, for their part, also argued that they gave the police notice on Friday, December 6, 2019.

Meanwhile the police have detained three people including the Assembly Member of the Tanzui-Sokabisi-Zorbisi Electoral Area, Mr Atinga Ahitophel, for questioning.

#FixTheCountry campaign goes international with over 500,000...
10 minutes ago