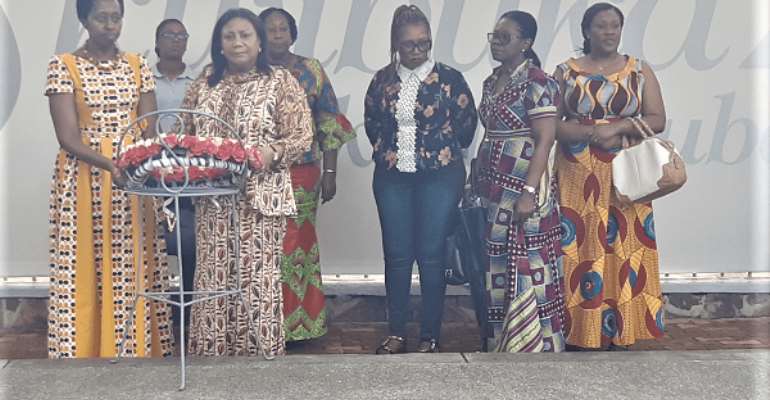 The First Lady, Mrs Rebecca Akufo-Addo, during a visit to Rwanda last week toured the Kigali Genocide Memorial Centre where over a quarter of a million Rwandans were buried in mass graves during the 1994 genocide in that country.

At the memorial, she paid her last respects to the thousands who perished at the hands of their fellow countrymen who used machetes, knives, sticks, crowbars and guns to snatch their lives.

The First Lady, who was in Rwanda to attend the 20th international Conference on AIDS and STIs in Africa (ICASA), visited the memorial where she laid a wreath on the huge tombs which have now become a tourist centre where people go to learn about what happened in that country 25 years ago.

Children’s memorial
The memorial has also become a second home for the thousands of relatives who troop there on a daily basis to visit their relatives who have been buried there.

The centre documents the genocide in 1994, helping to give Rwanda’s nightmare a historical context.

As part of the tour, the First Lady and her entourage, including Ghana’s Ambassador to Kenya, with oversight responsibility for Rwanda, Mrs Francisca Ashitey Odunton, and Dr Aisa Kirabo Kacyira, Deputy Executive Director and Assistant Secretary-General for the United Nations HABITAT, visited the children’s memorial where there were photos of children as young as six months who were butchered to death.

The life-size photos of these children were accompanied by intimate details about their favourite toys, their last words and the manner in which they were killed.

Background
In April 1994, reports of systematic mass murder within Rwanda began to filter out of the country and circulate throughout the world. Sadly, little was done to halt the mass killing. To outsiders the genocide was represented as tribal-based ethnic violence, with the Tutsis, who were described as “cockroaches,” as the victims and the Hutus as the perpetrators.

Precisely how many people were actually murdered may never be known; estimates vary between 500,000 and over a million. The number of people killed is widely accepted as being somewhere close to 800,000.

In 2000, the Kigali City Council began the construction of the memorial centre. The centre is one of six major centres in Rwanda that commemorate the Rwandan genocide. In April 2004, on the 10th anniversary of the genocide that tore Rwanda apart, the Kigali Genocide Memorial was inaugurated.

The centre does not only document the genocide, but it also describes the history of Rwanda that preceded the event. The site exhibits human remains, belongings and the tools and weapons used in perpetrating the heinous crimes.