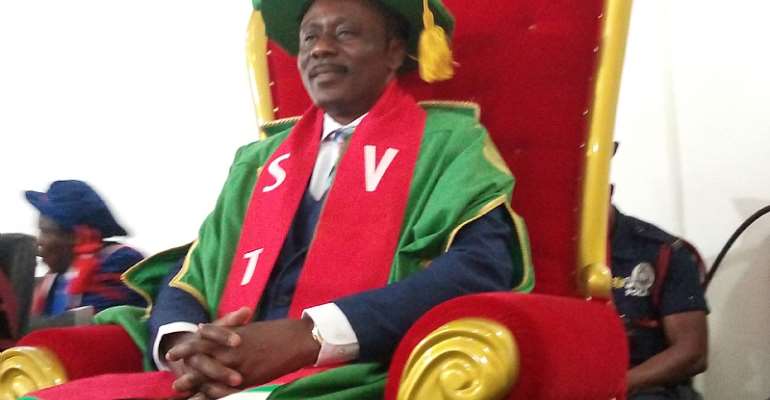 The Minister of State in-charge of Tertiary Education, Professor Kwesi Yankah has challenged technical universities to chart a new path of research and innovation distinct from other universities.

He said this new paradigm poses a huge responsibility and requires leadership that has the vision to deliver optimum outcomes to shape the development landscape.

“The redefined mandate has been to provide higher education in engineering, science, technology-based disciplines, technical and vocational education and training, applied arts and related disciplines as stated in the Technical Universities Act, 2016,” he was speaking at the investiture of the first substantive Vice-Chancellor of Sunyani Technical University in Sunyani over the weekend.

The Governing Council of Sunyani Technical University at its sitting on 26th September, 2019 accepted the recommendations of the Search Committee set up by the Council and appointed Professor Ing. Kwadwo Adinkrah-Appiah, a renowned Civil Engineer and erudite scholar, as the first substantive Vice-Chancellor of the Sunyani Technical University with effect from 1st September, 2019.

He was employed as an Instructor at the Building Technology Department of the then Sunyani Polytechnic in the year 2001 and was appointed as a Lecturer in 2006 and was later promoted to the rank of Senior Lecturer at the Civil Engineering Department in 2012, and subsequently as an Associate Professor of Civil Engineering in 2016.

The K. Nsiah Gyabaah auditorium, the university’s largest conference centre, where the investiture took place was filled to capacity throughout the duration of the programme. The Tanokrom Agromma from the Centre for National Culture in Sunyani, the STU Choir and the 3BN Brass Band group were at hand to entertain the gathering with some cultural displays and songs

Delivering the keynote address, Minister of State in-charge of Tertiary Education, Professor Kwesi Yankah noted that skills development in vocational and technical training is what will transform Africa’s economies and drastically reduce unemployment.

“As technical universities, there is absolutely no need to be desperately seeking academic laurels and charting paths that are normally associated with traditional liberal arts universities….Avoid following the ‘madding’ crowd towards the monotony of uniformity, but position yourselves toward the progressive path of differentiation and diversification,” Prof. Yankah stated.

In his inaugural address, the Vice-Chancellor, Professor Ing Kwadwo Adinkrah-Appiah used the occasion to express his gratitude to all those who have contributed to his success story which has culminated in his current status.

Outlining his vision for the university, Professor Ing. Adinkrah Appiah said management had already set up a Strategic Plan Review Committee which is working to evaluate the successes and failures of the current strategic plan and come out with a new five-year Strategic Plan, which will fit into the ten-year development plan for the period 2020 to 2030.

He was positive that through this, the university will be re-positioned to utilize science, technology, engineering, technical and vocational education and training as well as applied arts to achieve its mandate as contained in the Technical Universities ACT, ACT 922 as amended.

The Bono Regional Minister, Mrs. Evelyn Ama Kumi-Richardson stated that the NPP government recognizes and places premium on technical and vocational education and training as a key driver and pillar to national development.