Wa: Woman Delivers In Tricycle Over Lack Of Ambulance 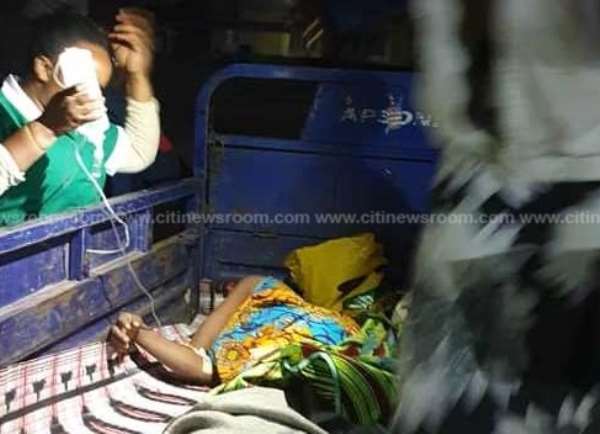 The lack of an ambulance in the Wa East District of the Upper West Region has compelled Gladys Lewa, a 21-year -old woman at Kpaglaghi to be delivered of her baby in a tricycle.

Gladys Lewa was put to labour last Friday at the community but had to be transported on the tricycle upon referral to the Busah Health Center in the Wa Municipality which is about 20 kilometres away because there is no single ambulance in the Wa East District.

She was only accompanied by her rival, Faustina Kondoma who delivered her of the baby midway into the journey in the bush.

“Cars don't come to our village because of the bad nature of the road. And there is no ambulance too. So the only means to carry me was the tricycle. Imagine travelling with pain in a deplorable road. We got to a point and the child was coming. It was only my “rival” who was accompanying me so she helped and the child came out”.

According to her, even though she managed to endure the pains of childbirth through the bumpy road in the tricycle, she gave up on her survival because her placenta could not come out after delivering in the middle of the bush.

The tricycle driver, however, managed to get her to the Busah Health centre but before they got there, the 21-year old who was experiencing her first childbirth had gone into coma and had to be referred again to the Upper West regional hospital in the same tricycle because of the lack an ambulance at the regional facility.

Gladys Lewa finally got to the regional hospital with a 4.6HB as a result of over bleeding but was saved.

Faustina Kondoma described the incident as her worse experience in life and called on government to find a lasting solution to the no ambulance syndrome in the region.

“I don't pray for any woman to go through what we went through. It is us today, who is next tomorrow? As if we don't vote. The government must do something about it. If the road were to be good, we could get a car to transport her”.

Charles Tongan, the husband of the patient commended workers at the regional hospital but called for stringent efforts to provide ambulances to the various districts in the region.

The Upper West region currently has less than 3 functioning ambulances serving the over 800,000 residents in the area.

This coupled with a lack of doctors and other critical staff, is hampering healthcare delivery in the region.

An ultramodern regional new regional hospital which was commissioned on August 18th 2019 to help address the challenges is still closed to the public.