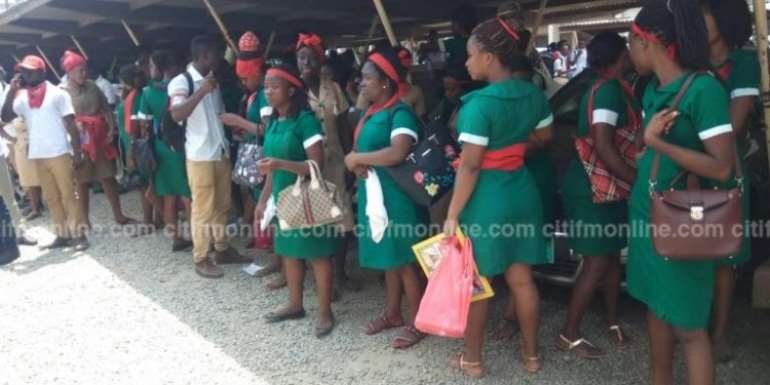 The Ghana Registered Nurses and Midwives Association (GRNMA) is demanding the payment of allowances of nurses and midwives interns on national service to prevent any industrial action.

The GRNMA alleges that the majority of these nurses have not been paid since April 2019.

President of the Association, Dr. Kwaku Asante-Krobea in a letter to the Health Ministry following their national council meeting last Friday demanded that the nurses be paid their corresponding allowances on the single spine salary structure as negotiated.

He also requested that the arrears be paid before January 31, 2020.

He also demanded that all outstanding issues should also be resolved by the end of 2019.

“We have noted with concern, the plight of the majority of Nurses and Midwives interns on National Service Allowance over a period of eight months attributed to avoidable bottlenecks in their biometric registration. This is deemed as a disservice to these interns and will not be tolerated by the mother association.”

We, therefore, request as a matter of urgency that the Ministry of Health and its agencies and the Ministry of Finance should address the matter and all other bottlenecks related to the internship of these nurses and midwives on National Service. Salary arrears due the nurses and midwives interns from April 2019 to date should be paid to them by 31st January 2020,” the statement added.

According to them, life has become unbearable as they are unable to foot their bills including transportation to work.

Convener for the group, Emmanuel Dawuni told Citi News that they will only call off the strike if the government urgently addresses their concerns.

“The process that will lead to the payment of our allowance has not commenced at all because first of all, our tax identity cards have not been generated followed by the biometric verification. And in our case, in the whole of Upper East Region, with over three hundred health interns, only seventy-five health interns have been captured for biometric verification and we think that it is either the government is deliberately punishing us or disrespecting us. That is the reason for all this. We are even tired. We can't continue working on an empty stomach. We hardly feed ourselves. Our accommodation is a problem. We are appealing to the government to urgently address our issue,” he said.

The past few months have witnessed various groups including health workers calling on the government for salary payment amongst other concerns.

In September 2019, the Nurses and Midwives National Service Personnel across the country appealed to the government to advance action on paying their five (5) months National service allowance arrears.

According to the group, the government had not paid them their national service allowances between April and August 2019 and efforts to get the government to start processes for the payment of their allowances have proven unsuccessful.