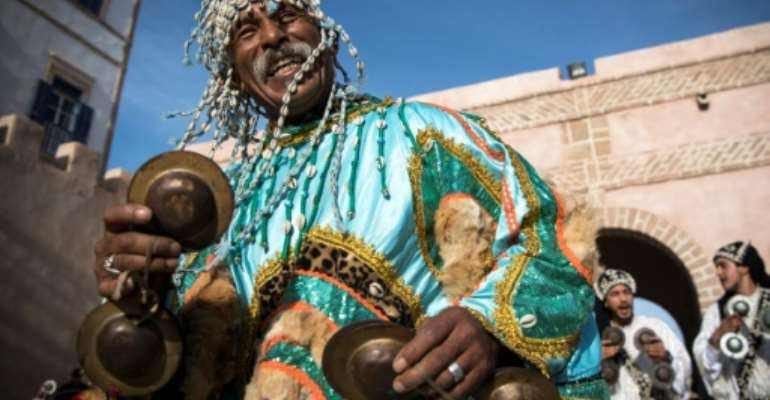 A Gnawa traditional group performs in the city of Essaouira to celebrate the decision of adding the Gnawa culture to UNESCO's list of Intangible Cultural Heritage of Humanity. By FADEL SENNA (AFP)

In a riot of colour, acrobatics and drum beats, Morocco's gnawa artists joyously celebrated the inclusion of their ancient art-form in UNESCO's list of Intangible Cultural Heritage of Humanity.

Troupes of the artists in traditional costumes paraded through the white-and-blue citadel town of Essaouira in southern Morocco Saturday, the sound of their lute strings and steel castanets filling the streets.

"Our goal is to bring this music to the world," said Mokhtar Gania, 56, one of the great Gnawa masters, with a broad grin.

Gnawa culture is a centuries-old Moroccan practice rooted in African rituals, Sufi traditions and music played with the guenbri, a type of lute with three strings, and steel castanets called krakebs.

The tradition, which includes the veneration of Islamic holy men, dates back to at least the 16th century and combines ancestral African practices, Arab-Muslim and Berber influences. 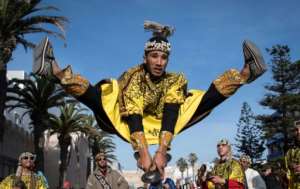 Mokhtar Gania's father, like his grandfather, was an emblematic figure of Gnawa ritual music, which traces its roots to the descendants of former slaves from sub-Saharan Africa.

Gnawa was once a set of esoteric rituals of rhythm and trance practised by brotherhoods and reserved for initiates, but it has since spread throughout the world.

The genre was popularised by a festival that started in 1997 in Essaouira, a small fortified city clinging to a rocky peninsula on the Atlantic coast that is also known as the "City of the Trade Winds".

Now the picturesque port town attracts waves of fans each year from across the globe to the Gnawa and World Music Festival.

It has seen jazz greats such as Pat Metheny, Didier Lockwood and Marcus Miller perform with the most famous Gnawa masters. 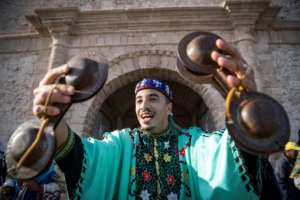 Gnawa refers to a "set of musical productions, fraternal practices and therapeutic rituals where the secular mixes with the sacred", according to the nomination submitted by Morocco. By FADEL SENNA (AFP)

Before the festivals, "this culture, recognised by major names on the world music scene, did not have the place it deserved in the Moroccan popular imagination," said Neila Tazi, producer of the event.

For Andre Azoulay, adviser to King Mohammed VI and president of a local cultural association, the UNESCO listing is "a recognition of Essaouira's pioneering commitment" to a community that was long marginalised.

Malaam Seddik El Arch, 68, is a privileged witness of this evolution.

Today, "musicians of all nationalities come here to learn guenbri," he said in the old city of Essaouira, itself a UNESCO World Heritage Site.

"Despite the language barrier, we manage to get along and play together," he said. "Music is a universal language." 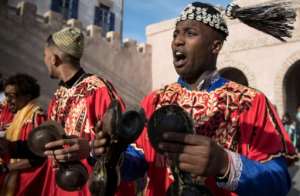 Mokhtar Gania, who has shared the stage with Carlos Santana, is preparing to release an album with Universal Music and go touring with his group of Moroccan and West African musicians.

There is also a new generation, ready to take over -- among them Abdeslam Benaddi, 25, who together with other local young musicians has created the group "Oussoul gnaoua", meaning "the origins of Gnawa".

Together, they launched the "Gnawa Generation" festival three years ago, where groups of young artists perform to Gnawa standards "with respect for tradition" before a jury of elder masters.

For everyone involved, said the young musician, "it is important to preserve this culture and pass it on to the next generation".