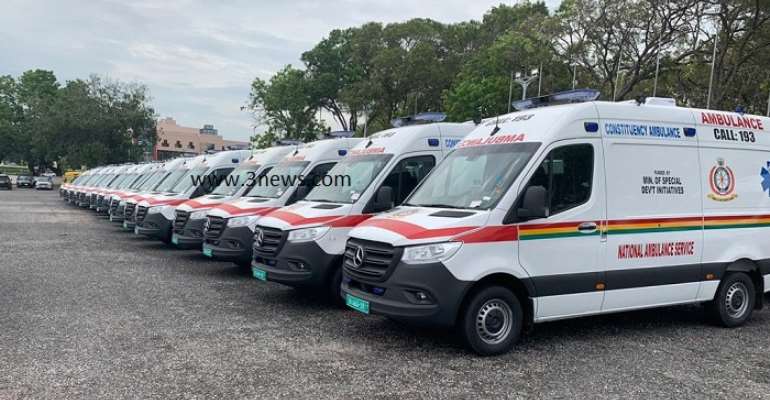 Two days ago, the President held a Media Encounter.

He made a lot of news-- on corruption, the size of his government, the number of his relatives in his government, etc. His answers on all these topics were matters on which reasonable people can disagree. But his response to the question on the distribution of ambulances is unacceptable.

For some time now, Ghana has had just 55 functioning ambulances. In response to this crisis, the NPP government rightly promised to provide "one ambulance per constituency "

And they are delivering. While one might quibble with the basis for the distribution of the ambulances, this was a good policy. Indeed, some, including myself believed that this should have been put ahead of the acquisition of drones. According to reports, the first batch of these ambulances, numbering about 60, have been parked in the forecourt of Parliament since the beginning of October. In response to calls by the NDC and others to release the ambulances, Minister Koomson stated that the delays were for "systems and processes" to be put in place. Then she added, unfortunately, "When they were in government for 8 years, didn't they know we needed ambulances?"

Then at his "Press Encounter", the President himself addressed the delays. He stated that "The Minister for Special Development Initiatives, who has been responsible for bringing them, told me a month, six weeks ago that some of the ambulances were in, should she distribute them? I said no, she should wait till they all come in so one day, we can distribute them all at the same time to all 275 constituencies." He added, "I saw myself getting tremendous amount of issues if I started distributing some and others did not get it." This left the unfortunate impression that the distribution of these 60 ambulances, which would have doubled the number of ambulances in Ghana and certainly saved lives had been subordinated to political considerations.

Where were the doctors in this government?
Where was the Ministry of health? Where was the Ghana Health Service? Where were the NPP health caucuses in our various hospitals? Any of these entities could have firmly talked the President out of this unfortunate idea but they did not.

Mister President, people who need ambulances are dying while those ambulances you wisely ordered are gathering dust. I remember the 4-year-old at Moree Health Clinic whose mother had spent the whole day, unsuccessfully looking for money to transport him to Interbertin hospital for care of his cerebral malaria who could have used an ambulance. I remember the accident victims being loaded into bone shakers for transport to hospitals who could use an ambulance. Though I saw these patients years ago, patients like them are getting sick and dying every day. Sickness and death do not pause while we play political games! We don't wait to build roads in all constituencies before commissioning them. You are not waiting, wisely, to build factories in all constituencies before commissioning them. You did not wait to build both drone centers before commissioning the first one.

And Rebecca did not wait to get help from all hospitals before handing what she had built over. Mr. President, release the ambulances now, with an apology! All lives matter-- in the sight of God. Holding ambulances while people die is inconsistent with our motto, "Freedom and Justice " as well as to your life-long commitment to human rights.

My fellow Ghanaians, join me in urging the listening President to release the ambulances!

The author has 206 publications published on Modern Ghana.