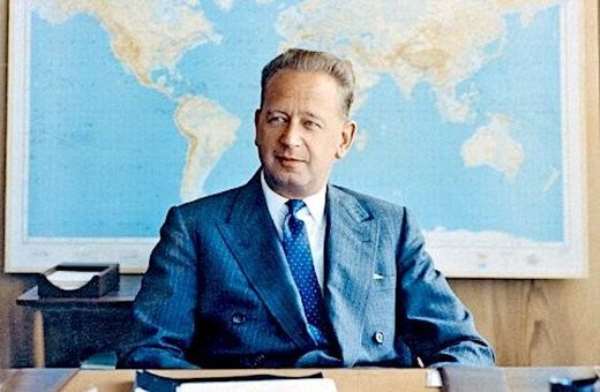 SWEDEN has presented a draft resolution to the UN General Assembly asking for continued support from UN members for the Eminent Person appointed by the UN to investigate the death of the [then] UN Secretary-General, Mr Dag Hammarskjöld, in September 1961.

Mr Hammarskjold was flying to Lusaka, Northern Rhodesia [now Zambia] to meet the notorious secessionist leader in the Congo, Moise Tshombe, when his aircraft crashed. It was suspected at the time that Tshombe’s “Air Force”, with the assistance of the white minority governments then operating in Northern as well as Southern Rhodesia [now Zimbabwe] and South Africa, shot down Hammarskjold’s plane, killing the Secretary-General and fifteen others travelling with him.

The Swedish draft resolution is titled “Investigation into the conditions and circumstances resulting in the tragic death of Dag Hammarskjöld and of the members of the party accompanying him.” Presenting the resolution, the Swedish delegate noted that the Secretary‑General’s “Eminent Person”, [the former Chief Justice of Tanzania, Mr Chande Othman] in his latest report, had concluded that “it remains plausible that an external attack or threat was a cause of the Hammarskjöld crash. "

The former Chief Justice had stated in the Report that: “There are specific matters that warrant further follow‑up." and Paragraph 1 [of the Swedish Resolution] requests the Secretary‑General to "reappoint the Eminent Person to continue his work."

The Swedish deelegate asdded: "This extensive investigation benefits immensely from continuity. No one is better placed than Chief Justice Mohamed Chande Othman to continue and conclude the investigation”

He requested that the Eminent Person should “draw conclusions from the investigation, by the end of the Assembly’s [coming] seventy‑fifth session.”

This would require the full cooperation of Member States [the Swedish delegate] continued. He drew attention to the fact that paragraph 3 of the Resolution specifically requests “those Member States referred to, in the report, to cooperate with, and assist the Eminent Person fully.” The "Member States" alluded to include Belgium, Britain, the United States, the Russian FGederation and South Africaz.

Such co-operation, the Swedish delegate said, “includes appointing without delay, independent and high‑ranking officials to conduct a dedicated internal review of the intelligence, security and defence archives" [of the countries alluded to, so as "to determine whether relevant information exists”.

Paragraph 4 of theSwedish Resolution then calls on Member States “to encourage all actors to ensure that any relevant records related to the death of Mr. Hammarskjöld and the staff accompanying him are made available for review by the Eminent Person.”

Since the Resolution contains a small programme budget implication, adoption will take place once the Fifth Committee (Administrative and Budgetary) has considered the matter later in the month [December 2019], the Swedish delegate explained.

Mr Justice Chande Othman’s final report in 2019 remindede the UN that he had, back in 2017, reported that “it was plausible that an external attack or threat was a cause of the [Hammarskjold] crash and that the burden of proof had shifted to Member States to show that they had conducted a full review of records and archives in their custody or possession”.

This is where the African Group at the UN, led by such internationally vocal African countries as Ghana and South Africa, should, come in and respond positively to Mr Othman's appeal. For instance, Ghana’s President of the time, Dr Kwame Nkrumah, was very well informed about world affairs. (As an example of his knowledge of events of the time, he told Ghanaians publicly of Lumumba’s murder by Tshombe's Belgian police force -- most probably from reliable sources within the Belgian Government -- before the murder was confirmed.)

The apartheid regime of South Africa was also extremely well informed about everything that went on in the Congo because South Africa ser5ved as an open base for the recruitment of white “mercenaries” who were fighting for Tshombe and other warlords.

The former Tanzanian Chief Justice says South Africa made an appointment, in May 2019, to assist him in tracing information. But no information had actually been "received”.

Neither the United Kingdom nor the United States of America, had also been forthcoming with the information he had asked for, the judge reported. And although the Russian Federation had told the Judge that it had “performed searches”, it had not provided any information that the "searches" had yielded.

Yet it is well known that the US National Security Agency has for years been “scooping up” electronic communications throughout the world. This includes encrypted messages between nations and their embassies abroad. Britain shares this trove of information gathered by the US.

Funnily enough, the Soviet Union was able to penetrate Western intelligence through agents such as Anhtony Blunt, Kim Philby. Burgess and Maclean (known as the "Cambridge Spes" who leaked Britain's secret information to the Russians) and so can be expected to hold massive snippets of information on the Congo, originating from the Western countries.

South Africa was, as has been noted earlier, the source of multiple white mercenary military activity in support of Tshombe, and so, no doubt, possesses a mass of information that can be given to the Tanzanian former Chief Justice to enable him to complete his task.

Ghana and South Africa ought to show an understanding of the warfare against the interests of the African continent represented by the suspected murder of Hammarskjoeld and assume the moral responsibility to name and shame all those countries which are withholding information from the UN investigator. Africa should put pressure on all African countries, especially, to publish what they can unearth from their own files. If they do this, they will make any future conspirators aware that those who plan to weak harm African countries, in opposition to the UN ideal of according due respect to the internal affairs of all countrties, woill not be allowed to hide for ever.