Mahama Has Absolutely No Respect for Ghanaians and Our Cultures 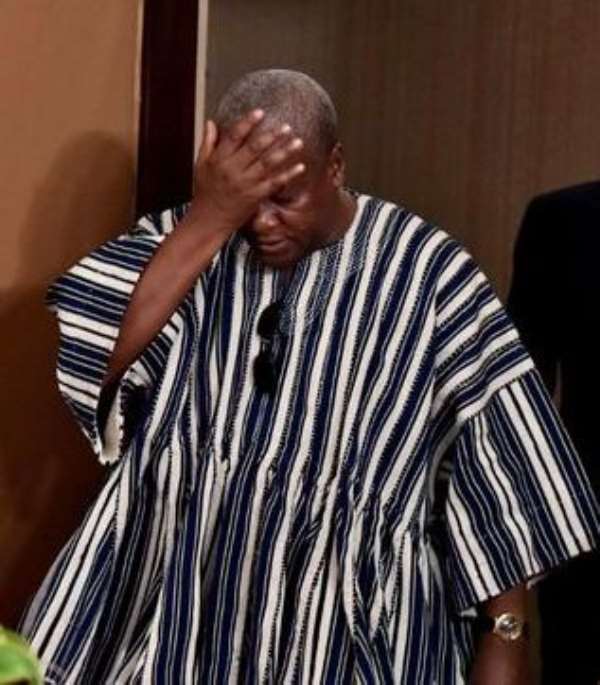 At the funeral of the wife of the Volta Regional Chairman of Ghana’s main opposition National Democratic Congress (NDC), the 2020 Presidential Candidate of the latter political party, Mr. John Dramani Mahama, was reported to have said that it was time for all members and supporters of the NDC to “stand together” in order to help “rescue the nation from [acute] hardships” brought upon it by President Addo Dankwa Akufo-Addo (See “Let’s Unite to Win Back Power” GhanaNewsAgency.org / Ghanaweb.com 12/15/19).

The former President was confronted with two humongous problems here, neither of which he showed himself to be capable of effectively and gracefully tackling. The first of these two problems had to do with the fact that common across all the cultural divides in the country, the last place on Earth where any politician worth his/her weight in gold would presume to grandstand about power grab is at the funeral of any Ghanaian citizen, at the funeral or the memorial service of even the most politically actively engaged wife of any of the regional chairpersons of one’s own political party.

You see, funerals, by their very nature, are inviolably solemn and sacred moments for the celebration of the life of the recently deceased and for the consolation of the relatives, loved ones and the friends and acquaintances of the deceased as well. Consequently, by so irreverently and tackily or crudely taking his rather cynical and vacuous electioneering campaign roadshow to the funeral of Mrs. Victoria Adzo Adzagli-Ametefee, the former President inexcusably desecrated the memory of the deceased. Mr. Mahama also scandalously humiliated and dishonored the family members and the relatives of the widower, to wit, Mr. Henry Ametefee.

It was also rather unprofessional for the Ghana News Agency reporter or correspondent who covered the event to have suggested that the late Mrs. Adzagli Ametefee’s funeral and memorial service was an all-National Democratic Congress’ affair, when the same event also conspicuously witnessed the culturally and morally appropriate and politically savvy presence of Dr. Archibald Yao Letsa, the Volta Regional Minister, as well as the equally gracious presence of Mr. Pius Hadzide, the Deputy Minister of Information, and an equally remarkable number of members, supporters and some key operatives of the ruling New Patriotic Party (NPP).

It was also flagrantly distasteful for Mr. Mahama to have invoked the name of the deceased in a cynical bid to firing up his increasingly irrelevant 2020 electioneering campaign and gratuitous grab for power because, to-date, the former President does not appear to have much to show by way of any remarkable development track-record in the four-and-half years that he firmly held the democratic reins of governance, during which harrowing period the level of unemployment in the country hit historic and unprecedented levels and more than half of all privately owned businesses in the country literally went under or effectively collapsed. The extant President Mahama would also sadistically add insult to injury by accusing Ghanaian entrepreneurs who saw their businesses collapse, as a direct result of the abjectly poor management of electricity supply in the country by the Mahama government, that globally and infamously became known as “Dumsor,” of not being creative and entrepreneurially savvy enough to be able to skillfully work around the perennial and erratic regime of power supply.

Meanwhile, the lights in both Mr. Mahama’s own private residence and at the Presidency never went out for even a split-second. So it is really not clear precisely what he means, when the former President asks the members and supporters of the National Democratic to “stand together” with him and wrest back power for the near-exclusive benefit of the northern-born and northern-descended Board-of-Directors of the so-called Savannah Accelerated Development Authority (SADA). Precisely what kind of power is Mr. Mahama talking about here? And also, power for what purpose and to what ends, besides the former President’s own extremely oversized ego?