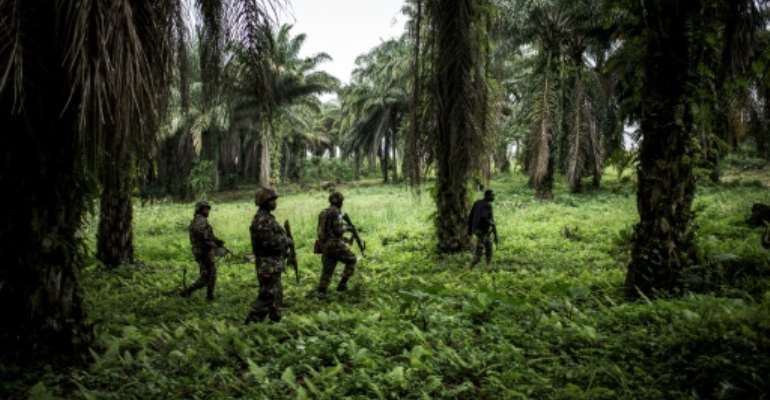 Troops from the UN's stabilisation force in the region began working with DR Congo forces against the militia in late October. By John WESSELS (AFP/File)

"Teams have been mobilised to recover the bodies and bring them back for dignified funerals," he said.

Dozens of armed groups have operated in the DR Congo's restive east for decades despite a UN peacekeeping presence, with recent attacks primarily blamed on the ADF.

More than 100 people have died in assaults blamed on the ADF since November 5.

The latest incident came a day after six civilians were killed in an attack in the regional capital Beni.

DR Congo forces launched operations against the militia in the region in late October.

The ADF has retaliated by carrying out massacres, apparently seeking to discourage civilians from helping the military.

Mounting anger over militia violence has sparked demonstrations in Beni, where local people accuse the UN peacekeeping force MONUSCO of failing to protect them.

In his first state of the nation address to Congress on Friday, President Felix Tshisekedi said he had changed the army command in Beni and sent 22,000 troops to the region.

Army chief of staff General Celestin Mbala and his team have been based in Beni since the end of November.

General John Numbi, a close associate of former president Joseph Kabila and the army's inspector general, arrived a few days later. He is under EU sanctions for his part in deadly crackdowns on protesters during Kabila's rule.

But some local people question the efficacy of the military operations in the region.

"We don't understand," local resident Anselme Katshuva told AFP. "Military operations are happening in the east, but the ADF are killing us to the west. The ADF has already left where the army offensive is taking place."

But Brazilian peacekeepers in the region have been criticised for their "passivity".

MONUSCO, one of the world's biggest UN peacekeeping operations, today comprises 15,500 military personnel and observers, 1,300 police and at least 4,000 civilians.

But it has struggled to make progress in the vast central African country, which is beset by an Ebola epidemic, poverty and poor governance in addition to the militia violence.