Appointment Of New CJ: When Will Ghana Learn From A Failed Democratic Experiment? 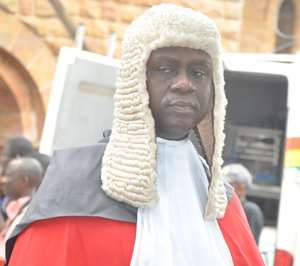 Not long ago, an associate professor of law at the University of Ghana, Raymond Atuguba, asserted based on empirical data analysis that the Supreme Court Justices hardly vote against cases involving the political parties that appointed them. The Supreme Court of Ghana is an arbiter of last resort, and pervasive political partisanship is a rebuke not only to judicial independence but also to political anonymity and political neutrality of the judges.

If not for partisan expediency, why not allowing the most senior on the bench become the next CJ, rather than various political actors superciliously influencing the different presidents to appoint their favorites? Is it not problematic to witness partisan politics dancing alluringly under the shadow of judicial independence?

Judges may risk becoming lightning rods for the purveyors of party politics partly due to delicate national cases their verdict may be associated. The verbal onslaught on Supreme Court justices has somewhat become a therapy for disappointed politicians. After the 2012 election petition, the impartiality of Justice Williams Atuguba among the pro-New Patriotic Party [NPP] was nothing short of oblivion.

To the National Democratic Congress (NDC) sympathizers, the name Atuguba became synonymous with the sacrosanctity of the judiciary. Justice Atuguba was appointed by President Jerry John Rawlings of NDC in 1995, and to corroborate professor Atuguba’s findings, he voted for NDC in the 2012 election petition. Both Justice Jones Victor Mawulorm Dotse and Justice Kwasi Anin-Yeboah were appointed by President John Agyekum Kufour of (NPP) in 2008, and they voted to challenge the presidency of John Dramani Mahama in the frivolous election petition in 2012.

On December 11, 1963, President Kwame Nkrumah’s knee-jerk reaction to the verdict on the Kulungugu bombing suspect, Tawiah Adamafio and Kofi Crabbe was destined to jeopardize Ghana’s independence of the judiciary. Two days after the ruling, the then chief justice, Sir Arku Korsah, was axed from office.

Temperamental Nkrumah, rushed a bill to the CPP controlled National Assembly to empower the president to disregard judgments from Ghana's court. As an ardent Nkrumahist, I concede that this was inappropriate for the country’s judiciary. Nkrumah’s capricious removal of sir Arku Korsah gained him global notoriety as a dictator.

Prime Minister K.A Busia and his progress party government also interfered with the work of the judiciary through his "No court, no court broadcast.” Busia, virtually bereft of economics ideas and the rippling effect of unemployment on the micro economy, pursued a draconic redeployment exercise in the public sector. Some 568 employees lost their jobs. One disgruntled Mr. Sallah challenged the legality of the progress party (PP) government's action. Supreme Court kicked against Busia’s senseless austerity measures through redeployment.

On April 20, 1970, Busia condescendingly broadcast that “No court could enforce any decision that sought to compel the government to employ or redeploy anyone.” President Kufour and with Nana Akufo-Addo as Attorney-General re-empaneled the Supreme Court to overturn an earlier ruling in favor of Lawyer Tsatsu Tsikata over the legality of the fast-track high court.

Independence of the Judiciary cannot thrive on the culture of innuendos, threats, and the Kangaroo court system. When Justices are perceived to be inextricably dabbling in partisan politics, their verdicts create tensions that could lead to political turmoil. An apparent facile relationship between the judiciary and partisan politics risk wreaking havoc on the stability of any given society. Under what fits the French historian, Fernand Braudel’s longue duree frame of reference, executive interference of judiciary, and retaliatory interference is anything but a dangerous bump.

Established by the 1992 constitution, the Supreme Court of Ghana is vested with absolute jurisdiction over all laws within the unitary nation. It is also responsible for determining the constitutionality of all laws in Ghana. In the United States, for example, the constitution empowers congress to decide the organization of the apex court. It could be an ipso facto of judicial immunity from executive control.

Judges are bold to dispense justice when they are practically immune to the president's influence. In 1974, the U.S vs. Nixon, the Supreme Court ruled that the president cannot use his or her power to withhold evidence in criminal trials. Ghana judges risk suffering from the burden of gratitude because of the manner in which they are nominated by the president.

Under neo-patrimonial countries, elections and appointments of public servants are typically done on partisan, tribal, and ethnic lines. Under Ghana's neo-patrimony, it is natural that individuals appointed by the president suffer from the burden of gratitude. Ghana must re-think through this semblance of executive despotism, otherwise known as the 1992 constitution. Otherwise, it is natural for every neo-patrimonial president to select those loyal to him/her. I think Ghana must live above this comedy, dressed up in a new political garment known as democracy.