Fund Raising In Support Of Orphanage Project In Techiman 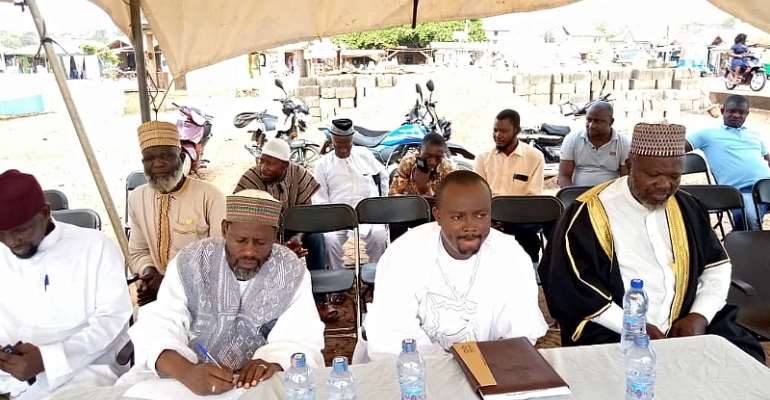 Techiman Muslim youth Association (TEMYAS) as organized a one-day ceremony at the Islamic School Park to officially launch a fundraising campaign in support of an orphanage project that was launched in January, 200 to support and cater for orphans in the municipality,

A speech delivered by Mr. Salifu Atindago on behalf of the chairman of the Association noted that the Association as being duly registered with the appropriate state institution to enable them operates without hindrance.

He was quick to add that membership is one of the major challenges of the Association and urge the general public to come and register to support the project,

He further stated that the main aim and objectives of the Association is to unite all Muslim youth in the Techiman Municipality and its environs, propagate the religion of Islam by spreading the word of Allah and more importantly enhance unity and co-operation with all state institutions.

Touching on achievement Mr. Salifu stress that TEMYAS sponsors a weekly radio preaching on burning Islamic matters at Asta FM in Techiman on every Tuesday evening, the Association has also procured a public Address Equipment (PAE) to be used for Islamic preaching in the municipality and its surroundings.

Again he added that the association as acquired three (3) plots of land at Tuobodom with an intention of building a school, a dormitory, mosque as well as an attractive playground for the orphans, he added that currently, the Association is catering for a number of orphans in the municipality.

Hon. Martin Adjei Mensah korsah, the Deputy Minister in charge of Regional reorganization and development who also doubles as the parliamentary candidate of the new patriotic party (NPP) in the Techiman Municipality was the special guest of honor

In his brief remarks, the Minister spoke on the role of the youth in Nation building and sited an example of Dr. Kwame Nkrumah, Namde Azekwai of Nigeria and many others that fought for the emancipation movement and today their names are remembered.

He urges the youth to be patriotic and support develops the country. He donated GH₵ (2,000.00) to the Association to support the project, he added that the new patriotic party is always ready to support the Muslim Society and will continue to support in that direction.

The Parliamentary Candidate of the National Democratic Congress (NDC) Hon. Christopher Bayeree, was among the dignitaries present at the program, he also donated GH₵ (1,000.00) Ghana cedis to the Association to Support their activities and also expressed his readiness to support Islam when the need arises.

Various speakers, including Sheikh Abdul Aziz Mahamud, and Sulayman Hassan preached on the importance of using your resources to support the course of Islam and the orphanage

The chairman of the program, Sheikh Bashar Mohammed Musah who is also the Acting manager of the Islamic education Unit of the Ghana Education Service, in his closing remarks thank and praised all those who came to grace the occasion and also supported financially towards the project.

He concluded by praying for all those who supported in a diverse way of ensuring that this program becomes a success.