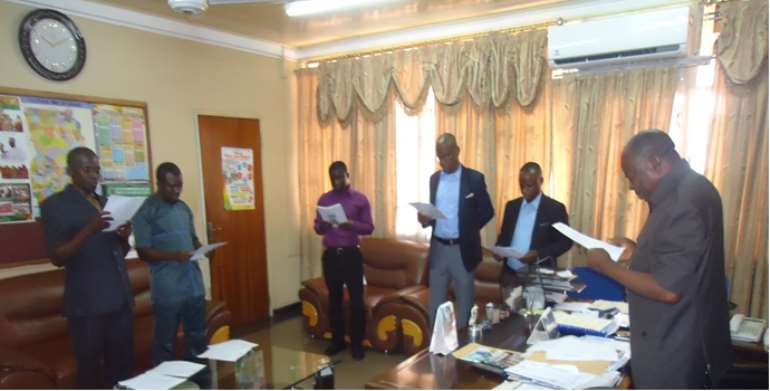 Mr. Stevens Siaka, the Deputy Bono Regional Minister and Member of Parliament (MP) for Jaman North have inaugurated the Regional Census Implementation Committee for the 2020 Population and Housing Census (PHC) for Bono Region in Sunyani.

The inauguration of the Committee, and subsequently the District Committees, marks the beginning of field operations in the Region.

The Minister in his inaugural address charge the committee members to discharge their duties to the best of their abilities and focus on achieving great success in the 2020 Census as their ultimate good.

“I have no doubt that the depth of knowledge and experience represented in this committee will provide the complement of skills and competencies needed for the successful conduct of the census and assure the best quality results”, he remarked.

Mr. Stevens Siaka (right), the Deputy Bono Regional Minister and MP for Jaman North inaugurating the Committee at the RCC in Sunyani

The Committee in group picture
Mr. Emmanuel George Osei, Head of 2020 PHC secretariat of the Ghana Statistical Service (GSS) who represented the Government Statistician at the ceremony said the committee will join GSS and be part of the execution of the huge national project to not only measure the size of the population but also to obtain basic information on the distribution of the population as well as its characteristics.

Mr. Emmanuel George Osei, Head of 2020 PHC secretarial of GSS delivering his address at the ceremony

The Secretariat Head noted that during the preparation stages, in the cartographic work literally every square meter has had to be covered to locate all settlements, irrespective of size. “As we intensify the publicity and education programme, and roll out to communities, we must get to every settlement, home or institution, group, and individuals, during the census count to record all inhabitants and their characteristics”, he advised.

On-field workers, Mr. George Osei said over 60,000 officers will be recruited and trained. He noted that the intensity of the work falls within a brief period of about five weeks; encompassing the training, listing of structures and enumeration.

He noted that the 2020 census compared to previous censuses is unique because of two cardinal interventions, which are the Digitization of the demarcation exercise and the use of computer-assisted personal interviews, in effect conducting a “paperless census”.

Touching on publicity, Mr. George Osei said a massive education campaign would be necessary to address key questions the census. “Your partnering with the media will be a great resource in this information campaign and would need to be an integral part of the census publicity programmed”, he emphasized.

He added that the field component of the census mapping has been completed, questionnaires and manuals for the data collection have been prepared and tested. Field operation he noted has also been tested in the Trial census and district census officers recruited in all districts. The Census Night is fixed on 24th March 2020.